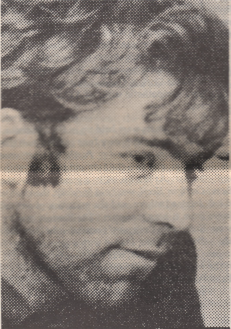 October saw the fortieth anniversary of the assassination of Peter Graham, shot dead in a flat in the Stephen’s Green area of Dublin on 25 October 1971 at the age of twenty-six. There is little doubt that if he had lived he would have been a major force in left-wing politics.

He came from the Liberties of Dublin, working as an electrician in CIE, and was a trade union activist. He joined the Connolly Youth Movement, where he gained his Marxist grounding, but later joined the Young Socialists before becoming active in Saor Eire, which was carrying out spectacular bank robberies, with many of its members, such as Frank Keane and Joe Dillon, being imprisoned. 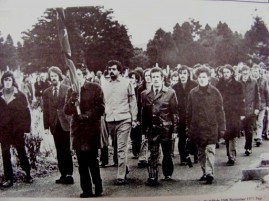 Peter Graham funeral. Centre-front, behind the flag-bearer, is Tariq Ali

He left for London, where he helped in building the International Marxist Group and the Fourth International. Along with Tariq Ali, Bob Purdie and Liam Dalton he helped in publishing an underground newspaper, Red Mole. Also while in London he wrote and published the Saor Eire manifesto in May 1971.

On his return to Dublin after about a year he was reintroduced to the state harassment that all communists and left republicans had to suffer in conservative Ireland.

Working with people such as D. R. O’Connor Lysaght and Máirín Keegan, he established the Irish Section of the Fourth International and saw this as complementary to his involvement with Saor Eire.

News of his death was greeted with shock by Irish and British socialists, and it remains unsolved. Hundreds attended the funeral, with large numbers of communists and republicans marching behind the coffin.

The oration was given by Tariq Ali, who said there were not many Peter Grahams and that his death was a blow not just to building the Fourth International in Ireland but to the Irish working class, which had lost a leader of great potential.

Like all fallen comrades, the greatest tribute one can pay is to continue to work for what they saw as so important: freedom and socialism.