The piece below first appeared at libcom here; thanks to Jared Davidson for passing it on: 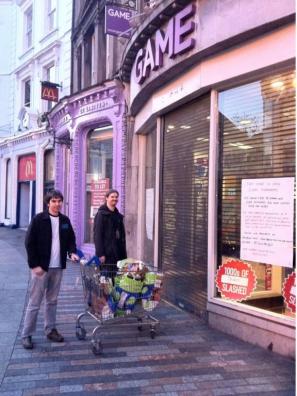 Former staff at closed Game stores in Ireland have occupied their workplaces to demand redundancy payouts.

All the stores in the south of Ireland have been occupied, after staff at the Limerick store began a sit-in.  The company has closed all of its Irish stores and a large number of UK outlets, with staff working right up until the lunchtime notice to cease trading arrived.

According to James Daly, a spokesman for the workers in Cork, administrators brought in from PricewaterhouseCoopers  have flouted Irish employment law by not giving the required 30 days notice for collective redundancies. Quoted by the Belfast Telegraph, he said,  “They just assume the law is the same as the UK. We were told ‘Go to the Government and claim your statutory redundancy’. That could take up to a year or 18 months to go through while Game is still trading in the UK.

“We do not want the END_OF_DOCUMENT_TOKEN_TO_BE_REPLACED

Comments Off on Occupy for Real – Games store workers in occupation

The following piece first appeared on the Justice for Marian Price site here: 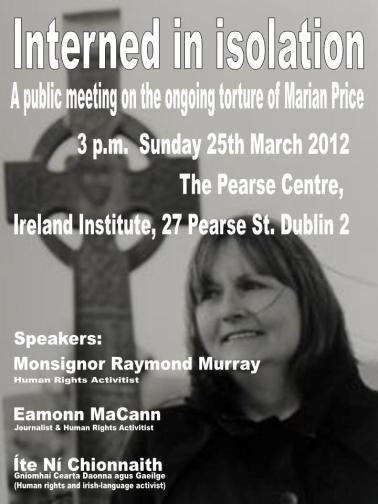 A packed public meeting, which was conducted bilingually, was held in Dublin on Sunday 25th March, where demands were made for the immediate release of Republican prisoner Marian Price.

“Internment and torture” were the terms used by the first speaker, Monsignor Raymond Murray, in describing Marian Price’s imprisonment, and he named Secretary of State, Owen Patterson, as responsible.  The chairperson of the meeting, Íte Ní Chionnaith, agreed strongly with the points made that it was unjust, illegal and inhuman to keep Marian Price in prison, given her illness.  Two friends of Marian’s spoke, themselves ex-prisoners, Nuala Perry and Eibhlín Collins, asking that the campaign for Marian’s freedom be broadened, and they gave an account of her present suffering and the injustice surrounding her imprisonment.

When the courts granted Marian bail in 2011, as Monsigner Murray stated, Secretary of State Patterson revoked a licence given to her in 1980 and she was immediately END_OF_DOCUMENT_TOKEN_TO_BE_REPLACED

The article below is reprinted from the March/April 2012 issue of Socialist Democracy’s bulletin: available here.  There are a couple of other very good articles in it, so do go and read it.  I’ll be posting a couple more pieces from it here and it would be good to get some discussion going, as there isn’t a mechanism on their site for discussion.  Although I think the article below is very good, one thing I disagree with is the silly pretence by SD that the gas-and-water socialists, who basically collude in partition, are “the socialist movement” in the north, while the clearly anti-capitalist organisation éirígí is merely republican.  I can appreciate that SD was suspicious of éirígí at first, but it should be very clear by now that this is a militant, socialist-republican organisation with far better politics than the twenty-first century Walkerites who SD refer to as “the socialist movement” in the six counties. 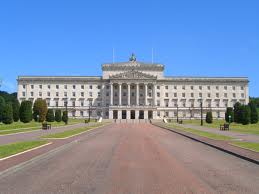 The 2011 elections in the North of Ireland marked a substantial victory for capitalism.  It marked the first point where one Stormont administration morphed to another via election without the collapse of the government.

That modest success quickly became a much more substantial victory. The election was preceded by the killing of a Catholic police constable by republicans and the election was settled in advance in a wave of hysteria where church, state, political parties, sporting and cultural bodies and trade unions all uniting to indicate rabid support for the new dispensation and to assert, yet again, that the only alternative to the sectarian and colonial settlement was bloody war.  The election result saw the consolidation of Sinn Fein and the DUP in power and the continuing decay of the END_OF_DOCUMENT_TOKEN_TO_BE_REPLACED

From the éirígí site: 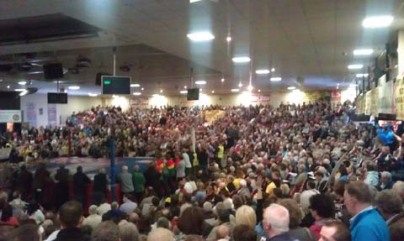 Dublin’s National Stadium was packed to capacity earlier today as the Campaign Against Household and Water Taxes held its final major rally ahead of the March 31 deadline for payment of Phil Hogan’s hated poll tax. In excess of three thousand people descended on the south Dublin venue, with hundreds having to stand outside as there wasn’t even standing room left within.

From noon it was clear that the rally was going to be a huge success as buses from all corners of the state started to arrive. As the crowds continued to swell a near carnival-like atmosphere developed with rounds of applause greeting blocks of new arrivals. When several hundred protesters from the surrounding communities marched up the South Circular Road the response of the crowd was as spontaneous as it was loud. 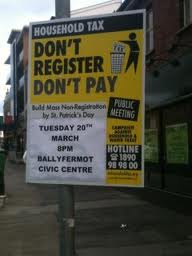 The Dublin government has set midnight on March 31 as the deadline for payment of its noxious ‘household charge’.  Homeowners who fail to pay the €100 poll tax by then will find themselves liable for additional incremental ‘penalties’ and ‘interest’ rising to a total of €42 over the course of the following twelve months.  Those who don’t register by March 31 are liable to prosecution in court where a guilty verdict could result in a €2500 fine.

And so with their deadlines and their threats of penalties, fines and jail, the Dublin government hopes to implement the dictates of their overlords in the Troika.  They publicly calculated the hundreds of millions of euros the home tax would raise for the bailout of the private banks.  In their arrogance they had even begun to prepare the ground for future property and water taxes that would squeeze more than €1000 per year from virtually every family in the state.

But, with all of their scheming, Fine Gael and Labour failed END_OF_DOCUMENT_TOKEN_TO_BE_REPLACED

Organising against cutbacks in Ballyfermot 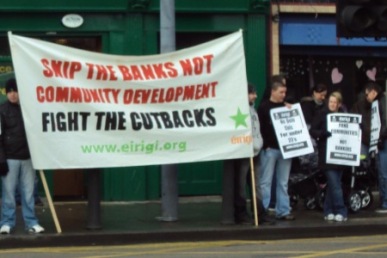 On Monday evening March 12, up to 100 people, including a number of local éirigí members and supporters, attended a public meeting of the campaign in the Ballyfermot Civic Centre.

The crowd consisted of local residents, trade unionists and representatives of local community and voluntary services. A number of political parties were also in attendance, including éirígí, the United Left Alliance, the Workers Party, and Sinn Féin.

The meeting was opened by Gerry Mc Carthy of the Ballyfermot Youth Service, who spoke about the hard-fought for services in Ballyfermot that are now under the very real threat of closure.  Gerry also spoke of END_OF_DOCUMENT_TOKEN_TO_BE_REPLACED

Comments Off on Organising against cutbacks in Ballyfermot

Belfast and Dublin meetings on Greece

the new tyranny and the war against austerity

Comments Off on Belfast and Dublin meetings on Greece

Campaigning for the prisoners today 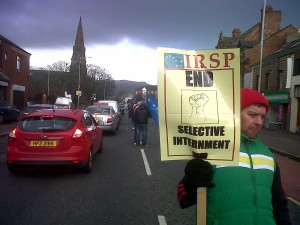 On International Women’s Day 2012 a discussion was held in West Belfast’s Conway Mill about the on-going political internment of Marian Price.  Bernadette McAliskey emphasised the illusion of normalisation by stating that this sort of meeting should not be taking place in 2012 and that the Six County state was supposed to have embraced democracy.  Another of Bernadette’s salient points was that people who are appealing to Sinn Fein to exert their influence to release Marian Price were deluding themselves.  Sinn Fein, as part of the Stormont executive, are now administrators of so-called British justice in Ireland.

Although made with good intentions, the appeal for figures such as Raymond McCartney to act on this issue is made from a sentimental point of view and because of past injustices faced by McCartney as a political prisoner.  However Republicans will be aware of how former comrades have been quick to turn their back on revolutionary principles once part of the establishment.

Eamonn De Valera, who fought in Easter week and took the Republican side in the Irish Civil War, later as Taoiseach condemned Republican prisoners to death on hunger strike and execution.  As Bernadette said “There is no point in END_OF_DOCUMENT_TOKEN_TO_BE_REPLACED

Comments Off on Campaigning for the prisoners today

This is a very important dispute and part of the reason I haven’t been posting much here over the past fortnight or so, other than some reprinted material from other sites.  The other blog I’m involved in, the NZ-based Redline, has about two dozen pieces on the Auckland wharfies’ resistance to the Port company’s attempt to smash their union and casualise waterfront labour.  Check out here.

I’m expecting, however, that normal transmission will resume on this blog next week.