The following is very slightly adapted from the piece that appeared on the éirígí site.  The loss of Máirín Keegan and Peter Graham, so close together, was a blow to socialism and republicanism in Ireland.  You can read the obit to Peter Graham here:

Máirín Keegan was a woman who lived ahead of her time.  Known for her engaging personality, Máirín had a thorough interest in all aspects of culture and a great intellectual curiosity.  She admired and studied the works of the great revolutionaries, in particular James Connolly, and believed vehemently in the working class and republican struggles.

Máirín was in Paris during the massive student-worker upsurge of May/June 1968 and the general strike; this event was to change her life forever.  She would go on to work with the socialist movement internationally and in Ireland, first working with the Young Socialists and Saor Éire, and later becoming secretary to Bernadette Devlin MP.

She also took part in the famous civil rights march organised by People’s Democracy from Belfast to Derry in 1969 that was attacked by loyalists at Burntollet.   Máirín was appointed by the United Secretariat of the Fourth International to oversee the founding of an Irish section.

However, not long afterwards 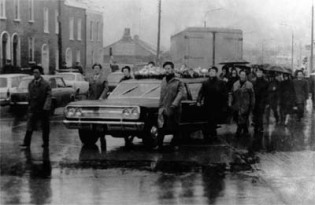 she died from cancer on the 9th January 1972.  She had only celebrated her 39th birthday on the 8th December 1971.  Shots were fired in salute over the coffin at the removal on a wet winter evening and the funeral saw hundreds of police surround the graveside at the burial in Mount Jerome cemetery, Dublin.

Several hundred socialists and republicans, including Bernadette Devlin, marched in the cortege to the cemetery. The Tricolour and the Plough and the Stars were carried and dipped before the coffin, accompanied by a Saor Éire guard of honour. 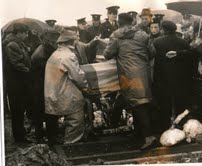 The oration was given by Raynor Lysaght, in which he remarked that Máirín was a revolutionary who combined activism with diligent political analysis. She had been on the executive of Saor Éire and had been appointed the representative of the Fourth International in Ireland after the assassination of the Dublin Marxist Peter Graham. Several verses of The Internationale were sung and the clenched fist salute was given.

January 9th 2012 marks the fortieth anniversary of her death.