And now for something completely different. . .

Maybe, I’m watching too much Monty Python at present. . .  But here, for a bit of relief from the politics, is something completely different – my top five albums of 2011 and finds of the year. END_OF_DOCUMENT_TOKEN_TO_BE_REPLACED

Comments Off on And now for something completely different. . .

From the éirígí site:

The proposed Treaty on Stability, Co-ordination and Governance in the Economic and Monetary Union is the latest initiative of the European Union elite to the end of furthering their ultimate goal of economic, political and monetary union.

“The proposed treaty on ‘Stability, Co-ordination and Governance in the Economic and Monetary Union’ is in reality an Austerity Treaty.  The goal of those who are pushing this treaty is to force the further erosion of our national and economic sovereignty.  Their aim is to remove our hard fought for democratic rights.  Ireland is now in a position of total colonial occupation.  We are a END_OF_DOCUMENT_TOKEN_TO_BE_REPLACED

From the Irish support group:

We, the Ireland for Peltier Group, need your help. Please sign the petition, take this link and pass it to each and all your contacts, asking them to also move it forward. We are trying to obtain as many signatures as possible. This will be sent to United States President, Barack Obama and also to the United States Ambassador.

In the spirit of freedom,

Comments Off on Support Leonard Peltier

From the site of the Stop Sopa campaign:

What is “Ireland’s SOPA”?

SOPA is the name of a piece of US legislation, the Stop Online Piracy Act, recently proposed in the US. It caused an Internet-wide outcry due to its far-reaching implications; way beyond simply closing access to outlaw file sharing websites, it would have enabled law enforcement to block access to entire internet domains due to infringing material posted on a single blog or webpage.

A similar proposal is about to become law in Ireland. And while 7 million Americans contacted their representatives to say No to SOPA in the US, Irish citizens will not get that chance because the new law in Ireland is not being voted on in the Oireachtas.

Instead, the law is being enacted by ministerial order. This new law will give music and movie companies the legal leverage to force Irish ISPs like UPC, Eircom and mobile networks to block access to sites suspected of having copyrighted material on them. It also means judges can order ISPs to block access to sites like YouTube, Facebook and Twitter where an individual user from anywhere in the world has shared infringing material.

Comments Off on Stop SOPA

The ten most-viewed pieces since this blog started in June are now:

1. Politics and the rise of historical revisionism

Comments Off on Top Ten

I’ve corresponded with veteran socialist-republican activist and leader Gerry Ruddy, on and off, for some years now.  I finally got to meet him last month (December 2011) in Belfast.  Below is an interview with him which covers a lot of the main political events and lessons of the struggle in Ireland over the past 45 or so years: 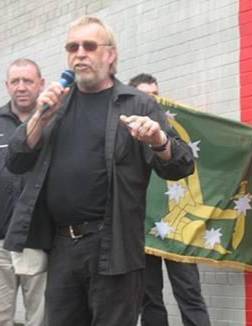 Philip Ferguson: Could you tell us a bit about how you first got involved in politics?

Gerry Ruddy: As long as I can remember I took an interest in what was going on in the world. For example I remember in 1956 when I was 10 praying for ‘Catholic Hungary’ when the Soviets invaded. I also remember the Cuban missile crisis when we all thought the world might end. I recall reading Michael Foot’s biography of Aneurin Bevan, the first real political book I had read, which helped direct me towards left politics. The election of Harold Wilson’s  Labour Government and its subsequent betrayals also helped direct me towards the left.  At university I joined the Labour Group and was influenced by the likes of Michael Farrell and Eamon McCann.

I joined both the Northern Ireland Labour Party and the Irish Labour Party (which had branches in my local town of Newry), plus I was involved in the Young Socialists, CND etc in the late sixties.  It was then I started reading the socialist classics, Lenin, Mao, Trotsky, Fanon, Guevara, Gramsci, Luxemburg and, of course, James Connolly.  I remember selling copies of the Irish Militant on the Falls Road at the 50th anniversary of the 1916 Rising.

PF: How did you come to join People’s Democracy?

GR: I was still at university and along with other militants participated in the mass demonstrations that spontaneously followed the October 5, 1968 attack by the RUC (Royal Ulster Constabulary) on a peaceful civil rights  march.  In the following months there were many protests and meetings and it was a great political education.  Gradually one could see the differences emerge between the left and the moderates both within Peoples Democracy and the broader civil rights movement.

PF: How would you evaluate the role played by PD in its early years?  For instance, some people in the Provisional IRA have talked about seeing PD as being more in tune with their politics in the late 1960s and early 1970s than Provisional Sinn Fein.  On the other hand, a number of PD members went on to fairly anti-republican politics.

GR: Personally I believe that PD was for the years 1968-73 the driving force of the mass movement.  When others took their foot off the pedal it was PD that would accelerate the engine of mass protest.  Burntollet was one clear example of that.  While building PD itself we also participated in united front tactics, working within NICRA (the Northern Ireland Civil Rights Association), the Northern Resistance Movement, the Political Hostages Release Committee and God knows what else, as well as making contacts with socialist groups within Ireland and abroad.

Naturally our militancy appealed to the nationalist working class in Belfast and some of our people worked closely with Provisional IRA members, some of whom had been originally in PD.  We even had educational classes in marxism with some of them.

While Provisional Sinn Fein was then regarded as a right-wing traditionalist party both PD and the PIRA were in favour of “Smash Stormont” unlike those in the Official IRA who, along with the CPNI (Communist Party of Northern Ireland), favoured the democratisation of Stormont.  So it was natural for us militants in PD to try to influence and win over to marxism and socialism working class militants within the Provos.  However we always regarded the Provos as a petit-bourgeois nationalist organisation that was anti-imperialist.

Inevitably mass movements break up. Some of the PD activists ended up in the judicial system, implementing British law and order. Others went into academic life and began to revisit history. Some became Unionists (ie supporters of the six counties being part of Britain – PF), some of us marxists, others republican and continued to try to change the world.  Others simply went into the media or disappeared from public life.

Don’t forget that in the late sixties and early seventies there were massive changes in the way in which we looked at the world.  The personal became political.  We became aware of END_OF_DOCUMENT_TOKEN_TO_BE_REPLACED

Marian Price is a long-time revolutionary activist in the national liberation struggle in Ireland.  She was imprisoned in Britain in the 1970s for her activities in the IRA (Provos).  While in prison she went on hunger strike and was force-fed for more than 100 days.  Marian left the Provos in 1998 over disagreements with the direction taken by the republican leadership.  She is now active in the 32-County Sovereignty Movement and is chairperson of the Irish Republican Prisoners Welfare Association. Marian is currently being held in prison in the six counties; see here.

Below is a slightly-edited version of an interview with her conducted by Carrie Twomey, which appeared in the Irish republican internet journal The Blanket.  It has mainly been edited with an eye to a NZ readership not necessarily familiar with particular groups, individuals and events.  I copied and pasted it into a word document in 2004, but there’s no trace of when the interview took place and appeared in The Blanket and I can’t find it by googling.  I assume the interview was done, therefore, in 2004 or at most a year or two earlier.

Carrie Twomey: How do you see the lay of the land for Irish republicans?

Marian Price: I think it’s very interesting.  I felt and still do believe that Sinn Fein will go the whole way.  I don’t think they have any intentions of going back from the Good Friday Agreement (GFA).  As far as republicanism goes, I wouldn’t consider SF today to be republican.  I see SF now as being a nationalist party.  And that’s by choice.

For republicanism, I think we had a setback.  I believe that it’s fragmented.  But I think that if we just stop and take stock, we can END_OF_DOCUMENT_TOKEN_TO_BE_REPLACED

This is certainly impressive. It is both readable and the product of immense research. For those who want to know how Dubliners lived during the First World War, it is probably indispensable.

The qualifying word is “probably”. This reviewer would be readier to accept unquestioningly the detailed information on social conditions were it not that he knows that the book’s political narrative is distorted by glaring omissions.

It acknowledges that Connolly was a revolutionary, but not that he was attempting to execute the Socialist International’s anti-war resolutions. (It quotes O’Casey’s history, which is insular and fuelled by resentment against Connolly, who supplanted him as secretary of the Citizen Army and heir to the command.)  More specifically, Yeates’ detailed description of the City of Dublin Steampacket Company strike does not mention that Havelock Wilson sabotaged it on the eve of the Rising, nor Connolly’s reaction, a significant clue END_OF_DOCUMENT_TOKEN_TO_BE_REPLACED

Comments Off on In review: Padraig Yeates’ A City In Wartime: Dublin 1914-18