Back in May, this blog reprinted an excellent piece from the Irish Political Review by Manus O Riordan on the revisionist assault on Constance Markievicz (see: The assault on Markievicz: as fact-free as it is malicious).  Below is another excellent piece from the IPR dealing with Pádraig Óg Ó Ruairc’s exposure of a chunk of other revisionist – ie professional anti-republican – propaganda masquerading as disinterested historiography.  People have a range of views about IPR and the politics of the small current which produces it.  However, there can be no doubt that these folks perform a valuable service in tackling and exposing the products of the political project of the historical revisionists.  The piece below is taken from this month’s IPR (August 2016). 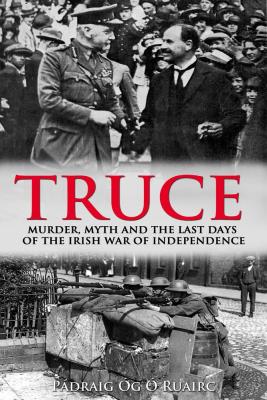 The March issue of Irish Political Review published the remarks made by Pádraig Óg Ó Ruairc on the occasion of the launch of his book, Truce: Murder Myth and the Last Days of the Irish War of Independence. Ó Ruairc then presented his book as “a challenge to myth, propaganda and fabrication”. Indeed it is. For, from the word go, the author tackles revisionist academia head on: “Eunan O’Halpin, Professor of Contemporary Irish History at Trinity College Dublin, stated in a recent television documentary that (RIC Constable Alfred) Needham had married in a church ceremony and was shot dead in front of his new bride just minutes after they had exchanged wedding vows. A common element in most of these accounts is the suggestion that the IRA Volunteers who killed Needham knew a ceasefire had been agreed with the British forces and that was a motivating factor in the attack. The stories about Needham’s wedding are part of a wider narrative about the War of Independence, which claims that the announcement of the Truce on 8 July 1921 led to a wave of unjustifiable ‘eleventh-hour’ IRA attacks before the ceasefire began. Supporters of this narrative claim that republicans launched a determined campaign to kill as many people as possible before the war ended and that these final IRA attacks were made mainly against so-called ‘soft targets’, i. e., unarmed members of the British forces and loyalist civilians… Some of these stories have a grain of truth in them. Others are entirely fictional, or are genuine killings taken out of context and with new details invented for propaganda value.”

Ó Ruairc exposes the Needham tale, which had been related with such feeling by Professor O’Halpin, for the fiction that it is: “There was no wedding ceremony, no teenage bride… Needham, a Black and Tan from London, was shot standing at the door of a stable with two other armed members of the RIC – not while leaving a registry office with his new bride. This tale about Needham being killed immediately after getting married appears to have been invented for melodramatic effect in a propaganda story. Yet different versions of this story continue to surface every few years masquerading as factual history.” (pp 9-11).

In his history of the build up to the Truce itself, Ó Ruairc also makes clear how the war violence of the preceding seven months was solely the British Government’s responsibility, for in December 1920 it had rejected what it would accept in July 1921, Michael Collins’s proposal for a comprehensive bilateral truce, with a commitment that “the entire Dáil shall be free to meet and that its peaceful activities not be interfered with”. (p 31). But, of course, the very reason for the War of Independence had been Britain’s refusal to accept the democratic validity, END_OF_DOCUMENT_TOKEN_TO_BE_REPLACED