Arrest and release of Brian Leeson 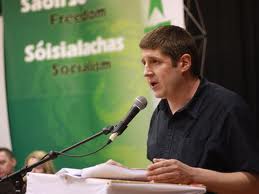 Brian Leeson, the national chairperson of éirígí, was arrested by gardaí at his home late on Tuesday evening.

The party’s general secretary, Breandán Mac Cionnaith, has recorded that “Neither the party nor Brian’s family are aware of any reason why the gardaí should have chosen either to arrest or to continue to detain him.

“However, it is clear that some sections of the press have engaged in ill-founded comment in relation to Brian’s arrest in terms that can only be described as highly sensationalist speculation. Such coverage is undoubtedly and quite obviously highly prejudicial.

“Brian has played a central role in organising opposition to the austerity policies being implemented by the Fine Gael/Labour Coalition in Leinster House. With further austerity and anti-working class measures due to be announced within the next few weeks, we are of the view that this arrest and the accompanying coverage by some media outlets is designed to undermine opposition to this forthcoming budget and to attack our party.

“We also believe that it is more than just mere coincidence that Brian’s arrest came just over a week after the party voted at our annual Ard Fheis to contest local government elections in the 26 Counties.

“We fully believe that these things are most certainly not unconnected.”

Brian was released just before 10pm on Thursday night.

Mac Cionnaith said, “Brian’s arrest and detention was a cynical exercise by the gardaí designed to foster a climate of black propaganda and misinformation within sections of the media directed against Brian and against our party in general.

“Brian’s release, without charge, confirms our view that his arrest had a clear political motivation.

“That view is also shared by the many people from various campaigning groups and from a wide range of political opinions right across Ireland who contacted the party in recent days to express concern about Brian’s arrest.”

Comments Off on Arrest and release of Brian Leeson

Comments Off on Beautiful tribute to Seamus Costello

Because this blog is dedicated to Irish politics, I don’t post stuff on other issues.  However I have long been involved in Palestine solidarity activity and the other blog I’m involved in, Redline, has a lot of stuff on Palestine.  Because of the close identification of the causes of Irish and Palestinian liberation, I thought readers might be interested in some of the Palestinian pieces.  So here are some links to Palestine stuff on Redline.  This is just a small selection of the 45 or so articles we have up on that section of the blog:

Statement of PFLP central committee on recent developments (May 2012)

Israel, Palestine: the one-state solution and the issue of Israeli-Jewish nationhood

Is there are a two-state solution to Israel-Palestinian conflict?

For a campaign of solidarity with the Palestinian struggle

Comments Off on Palestinian liberation

éirígí held its 2012 ard fheis in Belfast on Sunday, November 18.  The following is the ard fheis statement read by Louise Minihan: 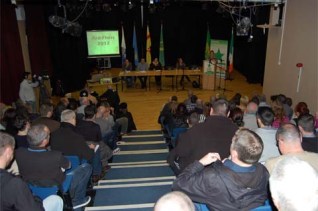 éirígí sends fraternal greetings to our party activists and supporters, both in Ireland and overseas, who cannot join with us here today. We commend them, and all others, who have contributed to the struggle for a free, socialist Ireland over the course of the last twelve months. This Ard-Fheis recognises the sacrifice of those party members who have been arrested, convicted or jailed over the last year as a result of their party activism. 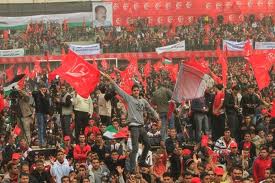 This Ard-Fheis extends solidarity to those who battle against imperialism across our world. From this venue in West Belfast, in the heart of occupied Ireland, we send a message to those people who live under the tyranny of occupation by the United States, Britain, Israel and other imperial powers – your fight is our fight and our fight is your fight; together we can not only challenge but, ultimately, defeat imperialism in all of its many forms. To the Palestinian people in particular we send a strong message of support at this time as they endure yet another onslaught from the Israeli state.

This Ard-Fheis reasserts the right of the people of Ireland to freedom, to collectively decide their own political, economic, social and cultural futures, free from the interference of foreign governments. We reject the right of END_OF_DOCUMENT_TOKEN_TO_BE_REPLACED

No Cuts to Child Benefit!

Protest Against the Home Tax and Austerity!

Join with éirígí for the pre-Budget protest

Comments Off on éirígí upcoming events

For legal and free abortion – as early as possible, as late as necessary 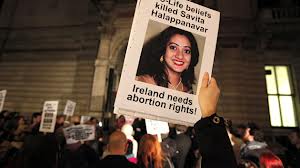 The death of Savita Halappanavar on October 28 at University Hospital Galway has put the abortion issue right back in the centre of Irish politics – not just in the southern state, but throughout the country.  This is especially the case as it coincides with the opening of a Marie Stopes clinic in Belfast.

The Halappanavar case is especially tragic and dramatic because the foetus was clearly unviable, she was in the throes of a miscarriage and Savita’s life was in danger.  She was denied an abortion because there was still a foetal heartbeat.  That heartbeat took precedence over the heartbeat, and life, of a woman.  Moreover, whatever we might think about the callousness of the doctors, they were obeying the law.  Legally, an abortion is only allowable if the woman’s life is in immediate danger. 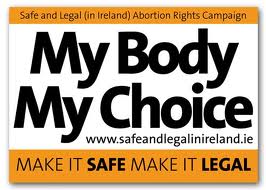 Abortion law on both sides of the border constitutes a major restriction on women’s rights and a major intrusion by church (both Catholic and Protestant) and state into women’s lives.  The opposition of so many Unionists to the extension of the British 1967 Abortion Act to the six counties is one of the things that reveals the hollowness of Unionist claims to ‘being British’.  They are ‘British’ when it suits them, and only then.

The opposition of Sinn Fein to women’s right to abortion, at the same time, is indicative of the equivocal nature of the Shinners’ republicanism.   Just as the Unionists are ‘British’ when it suits them and then don’t want a bar of British law when it comes to abortion, so the Shinners are republican when it suits them but then don’t want a bar of secularism when it comes to abortion.  Well, in the north at least.  South of the border the Shinners are opportunistically trying to put themselves in the van of the movement to ‘tidy up’ the legislation so that deaths like this won’t happen again but women will still be denied access to terminations. 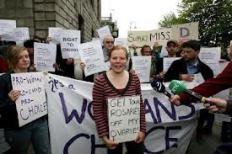 It’s a mark of the deeply reactionary nature of Fine Gael, Labour and Fianna Fail that southern Irish law on abortion is so tied to Catholic teaching.  The idea, enshrined in the 1937 Constitution, is that women’s place in society is primarily that of wife and mother.  If something goes wrong with a pregnancy, it’s the woman’s fault – some kind of sin has been committed and miscarriage is God’s punishment. . . as is death in childbirth or death in miscarriage.

Republicanism has always been a modernising and secularising movement in Ireland.  This means that it stands for the emancipation of women, an emancipation which is simply not possible as long as the church and state have more control over women’s bodies than women themselves.

What is needed is the scrapping of all restrictions on women’s democratic right to choose to terminate a pregnancy.  Abortion should be legal and free.  In terms of time-limits, women seeking terminations are likely to seek them early in the pregnancy, but the option needs to be open – in other words, as early as possible, as late as necessary.

Maud Gonne; her perspective of free women in a free Ireland is in urgent need of revival

A hundred years ago, Connolly, a strong supporter of women’s emancipation, argued that partition would lead to a “carnival of reaction” with the most backward and reactionary forces in power in both statelets.  Savita Halappanavar is the latest victim of that carnival of reaction.  A struggle for legal, free abortion, carried out on a 32-county basis, would be a massive blow against that carnival of reaction and for progress, secularism, freedom and equality across the whole island.  It could show that the interests of the mass of Irish women are obstructed by both reactionary statelets but could be met in a free Ireland.

Over a hundred years ago, Inghinidhe na hEireann, the revolutionary republican women’s group founded by Maud Gonne, put forward the idea that women’s freedom could only be achieved in a free Ireland.  It’s long since time to renew that perspective. 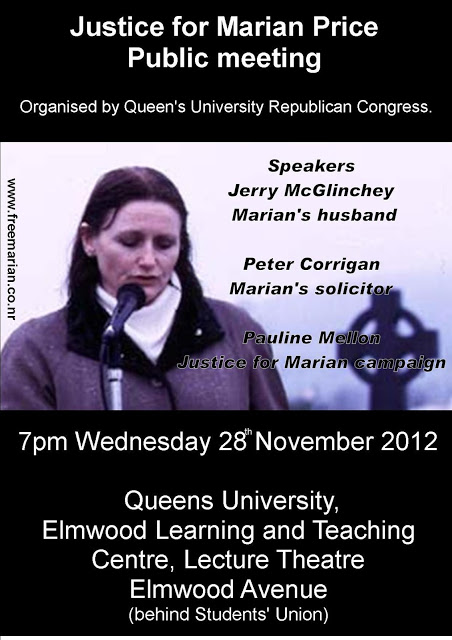 The following is a statement released earlier this week by republican prisoners in Roe 4, Maghaberry outlining their current position regarding the prison protest.

Statement from POWs, Roe 4, announcing the end of their current protest action.

Following the signing of the August 2010 agreement with the prison service, Republican POWs continually attempted to resolve all outstanding issues. Despite the continued use of the brutal forced strip searches we regularly engaged with political parties and groups who showed an interest in bringing a resolution to the impasse.

This process of dialogue lasted nine months. The amount of time and effort put into this process cannot be overstated. Unfortunately despite this lengthy engagement all we had to show were the injuries inflicted during these searches and beatings. The resumption of protest action became inevitable. On May 6th 2011 we commenced our current phase of protest action.

We are now into our 19th month of this phase of protest. Our resolve and commitment are unquestionable. As Republican POWs we are prepared to meet head on any attempt to reintroduce failed policies of the past. This should never have to be the case.

Following intense and detailed discussion and analysis, we, the Republican POWs on Roe 4 have decided on a END_OF_DOCUMENT_TOKEN_TO_BE_REPLACED

Comments Off on Statement by prisoners, Roe 4, Maghaberry

This is Ireland – we DO fight back

Ten prisoner support activists in Cork who have been the subject of what are essentially harrasment arrests by the gardai, following Special Branch attempts to intimidate people out of protesting in the city about the situation of prisoners in Maghaberry and Hydebank, were in court yesterday (November 19).  Their cases have been put back to December 17.  Further information at: http://prisonersolidaritygroup.wordpress.com/2012/11/19/todays-court-case-against-the-psg/

Comments Off on Support the Cork PSG 10