From the republican newspaper The Irish Felon, June 24, 1848.  This appeared in the original as one paragraph, but I have broken it up into several paras to assist 21st century readers.

The bit about “strangers” is also apt as a description of the Dublin4 and WestBrit set of today. 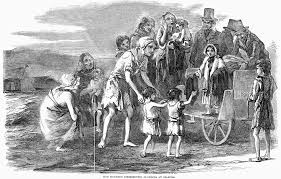 They or we must quit this island

They or we must quit this island.  It is a people to be saved or lost; it is the island to be kept or surrendered.  They have served us with a general writ of ejectment.  Wherefore I say, let them get a notice to quit at once; or we shall oust possession under the law of nature.

From the slums of Dublin to the battlefields of Spain: Brigadista Bob Doyle (1915-2009)

Robert (Bob) Andrew Doyle was born on 12th February 1916 at 15 Linenhall Street in Dublin’s northwest inner city. He was the second youngest of five siblings. Bob’s parents, Peter Doyle and Margaret Alldritt, were married in Dublin on 13th November 1904. Peter, aged 20 at the time, was employed as a seaman and lived on Upper Dorset Street with his three sisters. It appears that both his parents were deceased by 1901 as his eldest sister Anna, aged 20, is recorded in that year’s Census as head of the family.

Bob’s mother Margaret was 19 when she married and she lived in Kilmainham with her family. Alldritt is not a common surname in Ireland (in his biography, Brigadista, written in conjunction with Harry Owens, Bob’s mother’s family name is recorded as Aldridge, however the birth, marriage and census records confirm her family name was Alldritt). In the 1911 Census there were just seven Alldritt families recorded in Ireland; four were located in Dublin and three in Co Antrim. All of the Alldritt families were Protestant, with the exception of Margaret’s family who were Catholic.

Following their marriage, Peter and Margaret lived at 18 Moore Street, later moving to 33 King’s Inn Street where they shared a room with Margaret’s parents, Ignatius and Margaret Alldritt, and sister Annie. According to the 1911 Census Bob’s grandmother Margaret was 75 years of age (she was born in 1836 almost a decade before the Famine) and was 20 years older than his grandfather Ignatius. Bob’s grandparents had married in the Catholic church of St Andrews in 1874 and his grandmother was 50 years of age when she gave birth to Bob’s mother.

By 1911 Bob’s father was employed as a marine firefighter in Dublin’s docks and his mother Margaret had given birth to three children. However, two of her children had died in infancy and only one, Mary aged four, was surviving. Sadly, this was an all too familiar feature of working-class life in Dublin at the turn of the twentieth century.

High unemployment, overcrowded accommodation (one third of all families in Dublin lived in one room dwellings) and lack of public sanitation resulted in Dublin having the highest infant mortality rate (142 per thousand births) of any city in Ireland or Britain. Following the redevelopment of the area around North King Street and Church Street in 1915 Peter and Margaret moved to a newly built home at 15 Linenhall Street.

The wretched slums of Dublin

Linenhall Street is enclosed within a triangle of main thoroughfares — Church Street to the west, North King Street to the south and Henrietta Street to the north. In the 1700s the area was at the centre of Dublin’s burgeoning linen industry. It was the site of the city’s magnificent Linen Hall with its splendid façade, distinguished by a domed gated entrance which faced onto Linenhall Street.

However, by the late 1700s the linen industry in Dublin had END_OF_DOCUMENT_TOKEN_TO_BE_REPLACED

The political evolution of the Provisionals

The article below appeared in the July issue of Socialist Voice, paper of the CPI, as an opinion piece under the headline “Provisional Sinn Féin, republicanism, and socialism: Some comments”.

by Eddie O’Neill and Mark Hayes

By any relevant psephological indices, it is absolutely clear that Sinn Féin did exceedingly poorly—perhaps disastrously—in the recent local and European elections; and the results have clearly precipitated some reflective introspection by various party members.

For example, a defeated Sinn Féin candidate in Dublin, Lynn Boylan, has called for dialogue and co-operation with other “left-wing parties” in future, arguing that competition for votes had handed seats to Fianna Fáil and Fine Gael. She claimed: “I am a republican, I am a united Irelander, but I am a left wing activist.” Indeed she went on to claim: “That’s how we were able to stop water charges—it’s because the left came together and worked together.”

Let’s just leave aside Sinn Féin’s specific role in the campaign against water charges, which is contentious, and concentrate on the more significant ideological proposition about Sinn Féin and its relationship with “the left.”

Over the years the Provisional movement has undoubtedly flirted with socialism as an ideology. For example, the original Éire Nua programme articulated by the Provisionals had a reasonably well-defined social component, with the emphasis on a more equitable and decentralised distribution of resources. By the late 1970s, under a new “Northern” leadership, this trend was accentuated. This was perhaps most vividly expressed in Jimmy Drumm’s speech of 1977 (apparently written by Adams et al.) which stressed the need for social liberation and the importance of standing in solidarity with workers against British colonial rule and the “fascist” Free State. (The speech also, incidentally, rejected a reformed Stormont and power-sharing.)

In this period Adams not only criticised capitalism, he was fond of quoting Connolly, while Sinn Féin explicitly identified itself with the ANC, PLO, and Sandinistas. Some commentators even detected the influence of Marxism; and though this was hugely exaggerated, there was a sense in which Sinn Féin identified itself as an integral part of a global “left” movement. It undoubtedly established its radical credentials through community work and activism in working-class areas.

However, there was always another, more pragmatic and opportunistic dimension to Sinn Féin strategy. This could be detected during and after the Hunger Strike, when the process of politicisation sought to reconfigure Sinn Féin as an electoral force. It was confirmed in a very personal way to one of the writers of this article when a letter was smuggled out of Albany prison in 1983 (written by Eddie O’Neill and Ray McLaughlin, and signed by other Republican prisoners). This missive explicitly addressed “the left” and urged all comrades to show solidarity with the Irish revolution while calling for a “broad front” of left progressive forces to form a common platform against imperialism.

The correspondence was completely disregarded by the Republican leadership at the time. The writing was on the wall: Sinn Féin was moving towards conventional constitutional politics. It eventually came to see itself as the natural repository for middle-class Catholic votes and positioned itself as the successor to the SDLP as the primary representative of the “Nationalist” community.

In relation to the north, Sinn Féin eventually adopted the diplomatic strategy of. . .  continue reading here. . .

Comments Off on The political evolution of the Provisionals

The RUC used CS gas for the first time on August 12, 1969, in the Bogside of Derry. It invisibly covered the streets and seeped into every room of the houses, causing choking, vomiting and irritation of the eyes and skin. The British Army first used the gas in April 1970 when they indiscriminately fired off 104 gas canisters in Ballymurphy in West Belfast during a night of rioting.

Máirín Keegan of Saor Eire suggested to Butch Roche, an original member of Peoples Democracy, that they mount a publicity campaign to highlight the use of CS gas, because they were convinced it had done considerable harm. She also acquired two CS gas canisters that were photographed with the intention of using them in the publicity campaign. Roche decided on a symbolic action that wouldn’t injure anyone but bring home to the British public and establishment the impact of its use against the civilian population in Belfast and Derry.

On July 22, 1970, Butch arrived in London with the two CS gas canisters. The next day he entered the Public Gallery of the House of Commons, with a newspaper to cover the bulkiness in his pockets. He threw the gas grenades END_OF_DOCUMENT_TOKEN_TO_BE_REPLACED

The Trade Union Left Forum is hosting a discussion on the impact of the Industrial Relations Act on trade union activity and organising on Wednesday, 3rd of July from 1:15 pm to 2:30 pm in the Ireland Institute for Historical and Cultural Studies, 27 Pearse Street, Dublin (right near the ICTU conference in Trinity College).

Presentations will be made by:
Gareth Murphy (Financial Services Union)
John Douglas (Mandate)

The event is open to members of all trade unions so please come along and have your say.

For more information, please go to the TULF’s event page on Facebook by clicking here.