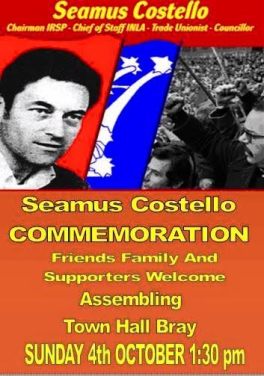 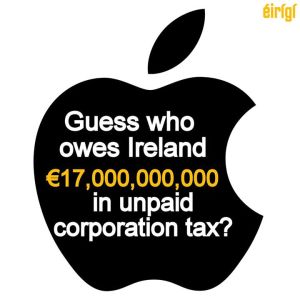 And looking to the future, if this one US corporation actually paid the full 12.5% rate of corporation tax the state could receive an estimated FOUR BILLION in tax revenue from just this one company each year.

For comparison the state currently takes an average of just €4bn in corporation tax from every domestic and international company combined. Yes, COMBINED.

Do you find it hard to believe these figures? Do you think éirígí has made them up? Or perhaps you think we used the Anglo-Irish Bank approach and ‘picked them out of my arse’?

The actual source of these figures is that well-known hot-bed of revolutionary socialist republicanism – J.P Morgan.

Back in May J.P Morgan issued a END_OF_DOCUMENT_TOKEN_TO_BE_REPLACED

Comments Off on Look who owes Ireland. . .

The socialist-republican party éirígí have opened their new ‘Belfast Office & Advice Centre’ on the Springfield Road. Party spokesperson Pádraic Mac Coitir, said that the new space was opened in response to ‘an increase in housing, welfare and other issues’ that the party were now responding to.

Speaking from the recent launch in Belfast Pádraic said, “Following the opening of our first Belfast  office two years ago, our party has received a gradual increase in demand for advice services and other requests for help from the local community. And it’s not just locals, we have actually had people from outside Belfast coming in to speak to us about common issues such as welfare and housing and other concerns that we never expected to deal with, like legal disputes and, more surprisingly, immigration.”

“It’s for those reasons that we felt the time was right to expand the services that we provide and open a more accessible space on the Springfield Road. We’ll now have a END_OF_DOCUMENT_TOKEN_TO_BE_REPLACED

Comments Off on eirigi open new office in Belfast 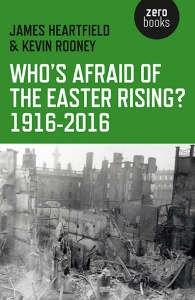 Two old acquaintances of mine – Kevin Rooney and James Heartfield – have written a new book on 1916, including looking at the response of the post-1921 establishment in the south.  I asked James to write a couple of paragraphs about the book.  I highly recommend that you get your hands on a copy.

A few years ago senior politicians from Ireland were meeting their opposites in Britain to talk about how to handle the 100th Anniversary of the Easter Rising.

‘The Easter Rising damaged the Irish psyche’, said the former Taoiseach, John Bruton: The Rising was ‘completely unnecessary’, and ‘led directly to the brutal violence of the war of independence and the civil war that followed’. The Rising’s leader Patrick Pearse ‘had justified the provos’ – the Provisional IRA. Bruton’s thinking echoes the prejudices of two generations of Irish intellectuals, from Conor Cruise O’Brien to Roy Foster, who have levelled forests of newsprint dismissing republicanism. In our book, ‘Who’s Afraid of the Easter Rising?’ Kevin Rooney and I show that the anniversary has always been a problem for the ruling class in Dublin, who fear Republicanism the movement because they owe their status to an agreement with the British to put it down.

The gathering crisis in the six counties: more Provo capitulation?

Since Adams & McGuinness got the IRA to effectively surrender, the Provos have made new friends and suffered endless humiliation at the hands of the Unionists and British state

The piece below is reblogged from the Socialist Democracy site here.

The latest crisis in the slow decay of the Irish peace process was unleashed following the murder of republican Kevin McGuigan when the local chief constable announced that the IRA continued in place with an organised structure and that members were involved in the murder of their opponent.

In the furore that followed the most honest comment came from a surprising source. British secretary of state Thersa Villiers said she was “not surprised” by the news. Neither was anyone else on the island of Ireland. Former southern Irish minister Michael McDowell explained that the governments had decided to leave a dried up husk, calculating that this would act as a barrier to the formation of a new republican movement. In fact the IRA have been involved in killings since the claim that they had been stood down and the police have obscured the issue with a formula similar to that used today.

So why have Irish politicians been thrown into crisis by a ghost? Especially one whose appearance lacks the element of surprise and where the police have used a familiar formula, used in the past to obscure direct IRA involvement, invoked purely imaginary cover names for the IRA such as Action Against Drugs and stopped short of alleging that the killing was carried out by the IRA as opposed to individual members, in fact explicitly ruling out evidence of a chain of command.

The explanation lies at the foundation of the peace process. The process is at odds with the programme of END_OF_DOCUMENT_TOKEN_TO_BE_REPLACED

Comments Off on The gathering crisis in the six counties: more Provo capitulation? 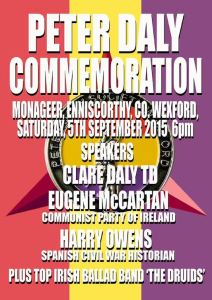