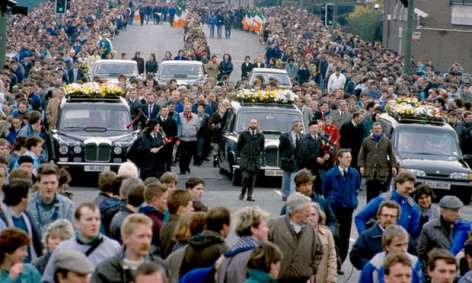 I had great expectations from this documentary. Its own publicity said it was the first documentary to deal with the events of March 1988 and that it included footage and interviews with people who had never spoken about the events before. That much was true; there are new interviews included. On that level the documentary lived up to the hype.

It included interviews with RUC officers in charge of security on the days in question, loyalist paramilitaries, republicans and relatives of those killed. Some of the interviews are informative and many of the interviews with republicans and relatives are poignant and they are allowed speak for themselves. The technique employed by the documentary maker is to let the interviews to speak for themselves, with very little input or voiceover. This is supposed to lend an air of objectivity or neutrality, but it doesn’t. The infrequency of commentary and discussion serve only to highlight the bias and the political position of the documentary. This is, we are told, a documentary about a time in the north when Protestants and Catholics were fighting each other – there is no mention of the British state as part of the conflict. We are introduced to a END_OF_DOCUMENT_TOKEN_TO_BE_REPLACED

Redline blog has some excellent articles on Marx/ism ranging from very introductory stuff to features on the so-called transformation problem in Capital, to material on present-day work practices and how Marx’s analysis explains why bosses use ‘teamwork’, intensification of labour etc, to material on Marx’s critique of political economy.

So, over the course of this year, I’ll be sticking up various bits and pieces of Marx (and Engels) on the Irish national liberation struggle – and also on its relationship to the British revolution.

“As to the Irish question. . . .  The way I shall put forward the matter next Tuesday is this: that quite apart from all phrases about “international” and “humane” justice for Ireland – which are to be taken for granted in the International Council – it is in the direct and absolute interest of the English working Glass to get rid of their present connection with Ireland. And this is my most complete conviction, and for reasons which in part I cannot tell the English workers themselves. For a long time I believed that it would be possible to overthrow the Irish regime by English working class ascendancy. I always expressed this point of view in the New York Tribune. Deeper study has now convinced me of the opposite. The English working class will never accomplish anything before it has got rid of Ireland. The lever must be applied in Ireland. That is why the Irish question is so important for the social movement in general.”

Unfortunately, most of the British left, especially in England, have never really grasped Marx’s work on Ireland and the British revolution.  Instead they END_OF_DOCUMENT_TOKEN_TO_BE_REPLACED

The Six Counties, like the rest of Ireland, is in the midst of a severe public housing shortage with supply far outstripping demand.

The issue of public housing played a key role in the Civil Rights movement during the late 1960s/early 1970s.

Prior to the creation of the Housing Executive in 1971, public housing had been allocated by local councils, and within unionist-controlled councils, discrimination in housing allocation was widely practiced against members of the minority Catholic community.

Indeed, the right to, and fair allocation of, public housing were key demands of the Civil Rights movement.

Through the creation of the Housing Executive, housing decisions were taken out of the political arena and placed in the hands of a neutral specialised organisation.

By 1983/84, public housing – almost all of which was controlled by the Housing Executive – accounted for 37% of continued here. . .

Excellent talk and discussion period – Ronan Burtenshaw at the James Connolly Forum in the little city of Troy, in New York state in March 2017.  Troy, of course, is somewhere Connolly himself lived and organised – thus the name of this working class political forum group.

Gaelic Athletic Association Fans for Choice, supporting the repeal of the 8th amendment and the right of women to access abortion, have produced a t-shirt for the campaign.

A great way to support GAA Fans for Choice and women’s rights in general would be to buy a t-shirt.  You can do this through their facebook page: https://www.facebook.com/GAA-Fans-For-Choice-158402364881890/

And don’t forget to “like” the page as well.