The Kildare turf-cutters have a Facebook page to make their case and advertise their political campaigning.  They’ve stuck up our most recent article on the turf-cutters’ cause.  Check out: https://www.facebook.com/permalink.php?story_fbid=689356367758771&id=188042187890194 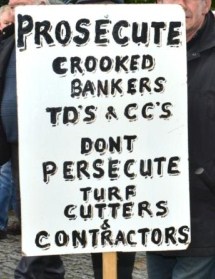 On 9 March 2012 four-and-a-half thousand working people took part in an agrarian-style demonstration outside Leinster House organised by the Turf Cutters’ and Contractors’ Association. As a result the Dublin parliament passed a motion tabled by Luke Flanagan TD in support of the turf-cutters and for a national raised-bog restoration plan.

More than a year later, however, the government is continuing its offensive against END_OF_DOCUMENT_TOKEN_TO_BE_REPLACED

Below is an article the Kildare Turf Cutters Association has submitted to the Leinster Leader:

The Kildare Turf Cutters Association (KTCA) including representatives from Mouds Bog (SAC), Ballynafagh Bog (SAC), Hodgestown Bog (NHA) and Black Castle Bog (NHA Edenderry) met with three executives of the National Parks and Wildlife Service (NPWS) at Sarsfields GAA Clubhouse on May 1st 2013. It was explained that the KTCA was attending the meeting under protest, to a great extent, as many members did not see any merit in the meeting, but that the KTCA would not give it to Minister Jimmy Deenihan to proclaim that the KTCA was in some way unreasonable and would not meet him or his agents.

The meeting lasted for three hours and the position of both sides on many issues was clarified.

The NPWS considers that relocation is the main remedy for the cessation of turf cutting on the raised bogs it has designated as Special Areas of Conservation. It also clearly states on its website that “The Government is committed, as part of the social partnership process, to the payment of a fair and proper level of compensation to landowners and users for actual losses suffered due to restrictions imposed as a result of their lands being included in formal proposals for designation as NHA, SAC or SPA”. The problem here however is – what is fair? And why does END_OF_DOCUMENT_TOKEN_TO_BE_REPLACED 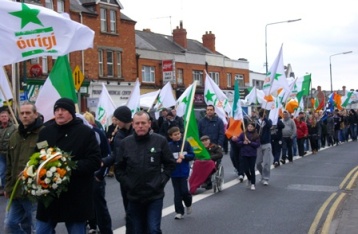 The first piece was written by D.R. O’Connor Lysaght, a long-time Irish Marxist activist and writer, associated with Socialist Democracy.  (I assume he is still a member, but I’m not totally sure.)  He sent the article to the blog via a mutual acquaintance.  Since I want to encourage contributions from a viewpoint which is both socialist and recognises the centrality of the national question, I’m running Raynor’s piece along with a second view from myself.  I’d also encourage folks to read éirígí’s own report and watch the video of the Dublin commemoration (both here).

Eirigi’s Dublin Easter Commemoration was impressive. Despite a last blast of the coldest recorded March weather, at least a hundred people of all ages, more than on the previous years, came to parade and listen to the orations.

But what message went forth? By now, this writer has enough experience to distinguish the cover of the rhetoric from the core meaning. Here he came away having seen a movement groping its path in a generally progressive direction. Brian Leeson’s keynote presentation was a significant advance on that which he presented at éirígí’s conference eighteen months ago. It was a blistering attack on capitalism from the standpoint of that mysterious force Socialist Republicanism. Such rhetoric has been used in the past all too often to cover the abandonment of the revolutionary core of Republicanism with the verbiage of social concern; it was a technique of Official Sinn Fein before it proclaimed itself the Workers Party. Leeson’s speech was different; if it emphasised the economic crisis, this was particularly proper in Dublin.

It did not ignore the British occupation. It made especial mention of Stephen Murney and his arrest for possession of photographs END_OF_DOCUMENT_TOKEN_TO_BE_REPLACED 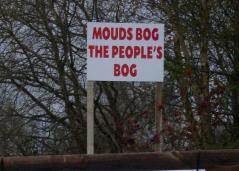 On October 2011 Luke Ming Flanagan TD and PRO for the Turf Cutters and Contractors Association (TCCA), noted that “the Minister for Arts, Heritage and the Gaeltacht , Jimmy Deenihan, had signed the EU Birds and Natural Habitats Directive which banned turf cutting while the matter was still in negotiation.”  He added that this ban occurred despite a compromise proposed by the TCCA whereby 80 per cent of 53 bogs in special areas of conservation would not be cut.

One year on and the Dublin government is continuing it’s offensive  against the turf cutters.

Following an extraordinary meeting of the TCCA in Birr Co. Offaly this year the group issued a strong statement disputing END_OF_DOCUMENT_TOKEN_TO_BE_REPLACED

Protests by the turf-cutters have been continuing over the past several months, while meeting resistance from the 26-county state.  Luke Ming Flanagan TD and PRO of the Turf Cutters and Contractors Association has pointed out, for instance, “the turf-cutters are being intimidated by the National Parks and Wildlife Service (NPWS)”.  He has likened the turf-cutters’ activities to US black civil rights heroine Rosa Parks stayed seated on the bus and refusing to give up her seat to a white person.  “There are occasions that during the tyranny of the state, the law needs to be broken,” Flanagan has noted.

On June 20, over 200 turf cutters were involved in an overnight protest at Clonmoylan Bog near Woodford in Galway, during torrential rain.  The protest continued until 4pm the following day, observed by up to 60 police, some in END_OF_DOCUMENT_TOKEN_TO_BE_REPLACED 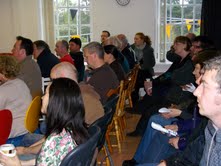 On Wednesday 2nd May 2012, a meeting took place entitled “The EU Permanent Austerity Treaty: is it economic suicide?” at the Liffey Studio in Newbridge, County Kildare .  A standing room only crowd came to hear artist and veteran activist Robert Ballagh of the People’s Movement and John Dore, PRO Kildare Turf Cutters Association.  The large turnout from the people of Kildare seemed to reflect the concerns about the Austerity Treaty.

Robert Ballagh explained that the Treaty would turn Ireland  into a regime of economic austerity, involving deeper and deeper cuts in public expenditure, the privatisation of public services with  more unemployment and emigration.  The Treaty will make a permanent feature of that external interference in our economic affairs that was obnoxious when Fianna Fail surrendered sovereignty to the European Central Bank and the International Monetary Fund.  Ballagh noted, “if  it’s bad in the short term – and it is – it’s even worse when made permanent.”

John Dore spoke of the turf cutters experience in dealing with the EU, explaining that the EU Habitats Directive will prevent families and domestic turf cutters from cutting turf as they have done for hundreds of years.  He noted, “Turf cutters, their families, friends and supporters may wish to take this into consideration when they vote in the referendum on the Austerity Treaty.”

Having previously rejected the turf cutters’ case, the government promised a delegation to travel to Brussels to meet the EU Commission.  However, this approach floundered in Brussels, the EU insisting that  turf cutting must stop.

Comments Off on Newbridge meeting against Austerity Treaty

is it economic suicide?

Comments Off on Newbridge public meeting on EU austerity treaty 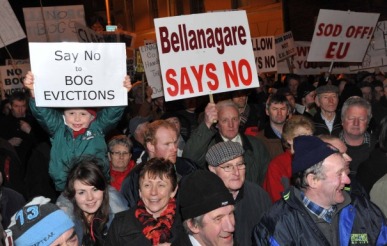 One of the most important developments in the last 18 months in the twenty-six counties has to be the resistance of turf cutters to the EU directive that banned turf cutting.  On March 9, several thousand people took part in a protest outside Leinster House organised by the Turf Cutters and Contractors Association, some travelling from as far away as Kerry, Clare and Cavan. They carried placards saying “No to EU bog evictions and no to EU dictatorship”.

As a result the Dublin parliament END_OF_DOCUMENT_TOKEN_TO_BE_REPLACED