Residents of Basin Street Flats and supporters have begun an occupation of Dublin City Council offices to demand that the council immediately address a range of maintenance and management issues in the south inner city flats complex. The recent flooding of a number of homes from leaking rooftop water tanks was just the latest in a long line of problems that residents have been forced to endure over recent years.

Despite the massive housing crisis gripping Dublin City, there have been continuous rolling cutbacks to housing maintenance staff levels for a number of years, a situation that neither the state nor the council are willing to reverse. With all others avenues exhausted, the residents are now fully justified in stepping up their campaign. Our representative for Dublin South Central, Damien Farrell, and other éirígi activists are participating in the protest as a show of solidarity with the residents of the Basin Street Flats.

Workers and the way forward: a socialist-republican perspective

In order to get real action, the workers will need to act for themselves not rely on ICTU leadership

It seems a long time now since trade union members in the south of Ireland voted to reject Croke Park 11, a deal promoted by leaders of the Irish Congress of Trade Unions in partnership with the Fine Gael/Labour coalition government in Dublin.  The current coalition, like the Fianna Fail/Green coalition that preceded it, has sought to make southern Irish workers pay for the financial crisis of Irish banks and the meltdown of the so-called ‘Celtic Tiger’ economy.

For several decades the bulk of the union leadership has pushed tripartite deals with the bosses and the state, a ‘partnership’ model which has been held up by union leaderships as far afield as New Zealand as worth emulating.  But these tripartite deals did not deliver to workers even during the ‘good times’ of the ‘boom’ periods in the 1990s and early 2000s.  Now the boom has turned to bust the partnership model has simply locked unions into accepting responsibility for the financial crisis and agreeing to the austerity measures demanded by the Troika.

The leadership of the Irish Congress of Trade Unions has engaged in some token rhetoric about ‘sharing the  burden’ of the crisis and they have marched workers up and down the hill and then sent them home a couple of times.  But, in general, they have acted as faithful lieutenants of the state and capital, serving more to END_OF_DOCUMENT_TOKEN_TO_BE_REPLACED

Comments Off on Workers and the way forward: a socialist-republican perspective

Comments Off on Remembering Maire Comerford

A front-page news story of the September 17, 1970 issue of the Irish Times informed readers of the disruption of the satirical review “A State of Chassis” at the Peacock Theatre.  The show was about the civil rights movement and growing conflict in the six counties and was written by John D. Stewart, Tomás MacAnna and Eugene Watters.

Protesters objected to what McCann called the “abysmally ignorant” portrayal of the north and its caricature of Bernadette Devlin.

Among those taking part was Mairin Keegan, a prominent figure in the Marxist-republican organisation Saor Eire.

Comments Off on Rare photo of Mairin Keegan and Eamon McCann 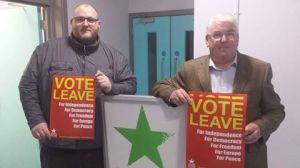 With the assertion that socialist politics is on the rise in Ireland, particularly in the wake of the Stormont elections, the socialist republican party éirígí now calls upon the progressive and socialist forces in British occupied Ireland to galvanise and deliver a strategic blow to both capitalism and imperialism; by voting ‘LEAVE’ in the upcoming referendum on membership of the European Union.

“The denial of the Irish people to the right of national self-determination is twofold, hindered by the British puppet administration in the North, and the plutocratic EU lapdogs in the south. The dual nature of this occupation by two separate imperialist entities has served to only further subdue the Irish working class to the barbarity of END_OF_DOCUMENT_TOKEN_TO_BE_REPLACED

Comments Off on éirígí launch campaign for EU withdrawal

Join in the Imperialism study group

We haven’t started it yet, due to involvement in other stuff.  However, it should be getting going at the end of this month.

It will likely be done through an email group, with members of the study group doing reading each week, someone taking on to present a synopsis and then everyone discussing the reading through the email group.

Because people are in different time zones – NZ, Canada, the US and western Europe – skype or other such hook-ups are not really possible on a weekly basis.  But we could all possibly manage occasional such link-ups. . . ?

You can contact the people initiating the study group by emailing: redlinemarxists@gmail.com

I look forward to studying with some of you!

Posted in Political education and theory

Comments Off on Join in the Imperialism study group