(Mick wrote an article about Saor Eire which appeared on this site in 2011;  this is an updated and expanded version of that article, including new material added by former Saor Eire members; the article has been proofed and edited by me – PF)

The 1960s was a time of upheaval and change in conservative Irish society; social attitudes, fashion and music, for instance, all changed dramatically. New social movements reflected the thinking of a new generation that, in particular, wanted more freedom. The huge student-worker protests of May-June 1968 in France, the Vietnamese struggle to remove the US States, its allies and their Vietnamese toadies, the US civil rights and anti-Vietnam War movements, and the national liberation struggles in Latin America and Africa galvanised opposition to the existing order. In Ireland, these events inspired people, especially the new generation, into action. This was especially the case around the civil rights movement in the north of Ireland. Among the new organisations which emerged here as a result of this new ferment and revolutionary idealism was the Dublin-based Saor Éire (SE) or, to give it its full name, the Saor Eire Action Group.

Saor Éire Action Group was established in the late 1960s by former members of the Republican Movement and newer young Irish political left activists coming together. As an organisation they claimed to have their roots in the END_OF_DOCUMENT_TOKEN_TO_BE_REPLACED 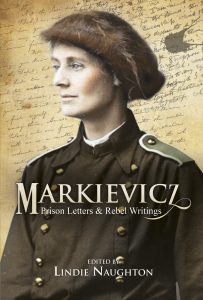 The first edition of Constance Markievicz’s prison letters was put together by Esther Roper, the partner of Markievicz’s sister Eva Gore-Booth, to whom many of the letters were addressed.  The editon was published by Longman Paul in 1934.  Roper, with help from Hannah Sheehy-Skeffington, one of the executors of Markievicz’s will and  longtime friend and fellow activist, wrote a substantial biographical essay for the book.

Over 50 years later Amanda Sebestyen worked on a new edition and wrote her own introduction.  This edition was brought out by the feminist publisher, Virago, in 1987.

Thirty-one years later (last year, 2018) Lindie Naughton, the author of a new recent biography – Markievicz: a most outrageous rebel (Dublin, Merrion Press, 2016) – has put together a new edition.  This edition returns the letters to their original form.  (Lindie notes, “Consulting the originals in the National Library of Ireland makes it obvious that the published versions of the prison letters skirted around some sensitive issues and blanked out the names of people who quite possibly were still alive at the time of the original publication.”)

Moreover, this edition adds a bunch of letters that haven’t appeared in print before.  These include letters to END_OF_DOCUMENT_TOKEN_TO_BE_REPLACED

Comments Off on Markievicz letters: a new, expanded edition

Frank Keane and the Irish revolution

“The magistrate in his summing up said that he had no doubt whatsoever that I was politically involved. This should stand to my benefit at a later stage and should really nail the lie that I’m a gangster, a criminal”.      – Frank Keane, Brixton jail, 14th August, 1970.

Frank Keane, who is now over eighty years of age, was born on May 8, 1936 in Peter Street, Westport, Co. Mayo.  He was once regarded as a dangerous political opponent by the Irish establishment.

Frank was the eldest of three brothers and a sister and was educated at the local Christian Brothers School.  In 1952 he moved with his family to North Road, Finglas in Dublin.  The following year he joined the Jackie Griffith Sinn Fein Cumann. (The cumann was name after a republican activist shot dead by the Free State special branch in Dublin on 4 July 1943.)

Frank volunteered for active service during Operation Harvest, the IRA 1950s border campaign.  With training/recruitment officers interned or on the run, he enlisted in the END_OF_DOCUMENT_TOKEN_TO_BE_REPLACED

London: talk on finance and the imperialist world economy

Tony Norfield will be giving a lecture next week at King’s College, London, on Wednesday 8 February.

The session is from 6pm to 8pm, and is part of a series of seminars at King’s on Contemporary Marxist Theory.

The seminars are open to the public, but arrive in time to get signed in if you want to attend.

Summary:
This paper discusses how the financial system both expresses and reinforces the power of major countries. Developing Marx’s theory by examining bank credit creation, bond and equity markets, the paper shows how what Marx called the ‘law of value’ is modified by the evolution of finance. To understand imperialism today, one has to recognise how financial markets help the centralisation of ownership and control of the world economy. They are also an important way in which the US and the UK siphon off the world’s resources. The question of Brexit and the City of London is also discussed.

Comments Off on London: talk on finance and the imperialist world economy

Imperialists out of Ireland poster

The article below appeared on the IRSP site on October 2 (2016):

Paid activists of the British Labour party (joined by supporters in the pacifist Belfast left) today attempted to use the guise of an anti-Tory austerity protest to promote efforts to organise electorally in the six counties, an intention which flies in the face of basic Socialist doctrine and traditional Labour claims to be ‘Anti-Imperialist’.

Sporting a banner proclaiming ‘Ireland did not vote for Tory cuts / break the connection with England’ IRSP activists distributed leaflets to all those in attendance, focusing on the traditional Socialist aspiration of Irish independence and encouraging the Belfast left to return to the cause of National Liberation as espoused by Marx, Lenin and James Connolly.

In recent months British Labour activists have been hosting meetings across the six counties aimed at building support for standing candidates in occupied Ireland; they have been supported in their efforts by the self styled ‘Socialist party’ formerly ‘Millitant Labour’ a dissident Labour party splinter group who effectively support the partition of Ireland and stronger links with the British left as a safe alternative to traditional Marxist aspirations towards Irish Freedom. 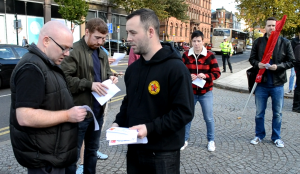 IRSP hand out leaflets to the pacifist left, urging them to adopt the socialist position

At a gathering at Belfast city hall, the IRSP in a civilised fashion gathered alongside the Labour activists with a view to offering the traditional Republican Socialist message, reminding them that Ireland was a subjected nation which has never had a chance to vote either for or against Tory cuts and promoting the wider cause of Irish independence as the principled socialist response to the continued economic and political oppression of our people. 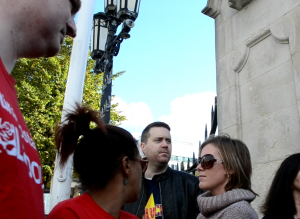 The IRSP attempted to engage those in attendance in debate on the importance of the issue and while some younger members of the Socialist Party admirably agreed to do so, the full time Labour workers refused, appearing un-confident in their purpose and showing physical distain when told that they were speaking to the IRSP.

The Irish Republican Socialist Party holds to the traditional Labour principle of full Irish independence and anti-imperialism and promises that any attempts to dilute that principle under a false flag of Socialism will be challenged and exposed.

The leaflet urging those in attendance to return to the Socialist position. 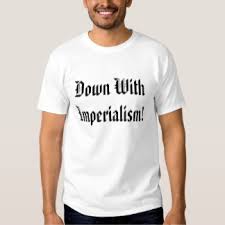 I’m currently involved with some other people in getting an Imperialism study group underway.  We will probably set up an e-group for this.

To read about it, go here.

Comments Off on Imperialism study group

Comments Off on 26-county general election

James Connolly and the unions we need today in New Zealand

Folks may be interested in this – Connolly is relevant all over the world!