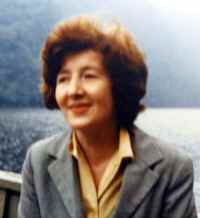 This month is an important one for hunger strike commemorations.  As well as the ten revolutionaries who died on hunger strike – or, perhaps more accurately, were murdered by Thatcher, her Labour Party allies and British imperialism – key activists in the solidarity campaign were targeted for murder, especially IRSP activists.  Miriam Daly was one of these, being murdered on June 26, 1980.  At the time of her execution, Miriam was the national chairperson of the Irish Republican Socialist Party.  Below is the speech by her husband and fellow activist James Daly, at the 25th aniversary commemoration in 2005.  It’s taken from the Irish Republican Socialist Movement site:

25th anniversary commemoration of the death of Miriam Daly, at her graveside, Swords, County Dublin, 25 June 2005. Address by James Daly.

At commemorations like this in earlier years, while the struggle continued, we could think in terms of the nobility of the cause transcending the horror of Miriam’s death, and I could quote James Connolly’s last message to his wife, “Hasn’t it been a good life, Lily, and isn’t this a good end?” But lately the cause for which she was tragically martyred has slithered down into slapstick comedy, farce and low buffoonery. Trimble with impunity calls Republicans dogs and pigs. War criminal Blair backs Paisley’s theocratic demand that since Republicans have sinned in public they must repent in public. That from an alumnus of Bob Jones University, whose president’s wife, Mrs Bob Jones III, asked for her opinion on something, stated “Good book says wife don’t have opinion, husband head of household have opinions”.

But this is not a case of harmless mud wrestling – entertaining, colourful folklore. Murderous buffoons are not confined to the six counties. George W. Bush launched his first presidential campaign from Bob Jones University. And in the six counties, to use an animal metaphor which doesn’t degrade the user, the fox has been put in charge of the chicken coop. Paisley, the master of destruction, the organiser of chaos, has got rid one by one of every previous leader of unionism, O’Neill, Chichester-Clarke, Faulkner, Molyneux and Trimble. His next target is the Parades Commission. When UDA banners are forced by the PSNI/RUC through Catholic areas like Ardoyne, murder is not far behind. Under that threat, the parades commission, if it still exists by then, could well allow the Orange Order to march down Garvaghy Road next year.

This year, on the 25th anniversary of Miriam’s death I feel there is at least one thing I can do, and that is to restate an important message she never tired of repeating. It was: to beware of and shun so-called “conflict resolution”, the alleged academic discipline which is in fact an imperialist confidence trick.

The conflict resolution agenda requires the obliteration of the obvious truth about the nature of the struggle. This has been distorted to such an extent that the inheritors of the 1912 loyalists’ successful threat of civil war in Britain, which was supported by British imperialist finance capitalism, the inheritors of the Curragh mutiny, and of the running of the Larne guns – never decommissioned – by all of which the six county territory was secured, are universally, and without argument from Sinn Fein, accepted as the arbiters of when a decontaminated Sinn Fein can be judged to have become “democratic”. On John Hume’s side of the conflict the dispute is said not to be about territory but about minds and hearts. There is no such illusion on the other side. The issue of territory has been won and ceded in advance.

Some republican publications which are ostensibly in opposition to Sinn Fein show that they are in fact following a similar politics when they invite unionists to use their pages to exhort the IRA to decommission, and when they say that there is nothing wrong with the Orange Order as long as its marches are within “its own” areas.

The Irish people were victims ground down in the end by many years not only of the relentless use in the foreground of the stick of repression, but also of the indefatigable use in the background of the carrot of conflict resolution. The fact that the conflict resolution approach was involved is emerging into the daylight now. It resulted in the majority of the Irish people’s being not only coerced but also tricked into voting yes in a referendum giving up for nothing the principle of national liberation which had been enshrined in articles 2 and 3 of the southern constitution, and into capitulating to John Hume’s politics.

Miriam had total clarity about the imperialist use of conflict resolution in Ireland. I will try to briefly restate her message here — in my opinion, that specific part of her anti-imperialist message which brought about her death.

Unlike the aims of conflict resolution, Miriam’s aim was the Irish Republican Socialist one embodied in the demands drafted by Seamus Costello for the Broad Front document and agreed at the IRSP’s first conference. They included:

Number 6. That the Irish anti-imperialist front rejects a federal solution and the continued existence of two separate states in the six and 26 counties as a denial of the right of the Irish people to sovereignty and recognises the only alternative as being the creation of a 32 County Democratic Republic with a secular constitution.
Number 7. That the Irish anti-imperialist front demands the convening of an all Ireland constitutional conference representative of all shades of political opinion in Ireland for the purpose of discussing a Democratic and secular constitution which would become effective immediately following a total British military and political withdrawal from Ireland.

Seamus always stressed the presence here of two points of principle: first that the British would be excluded from such a constitutional conference; and second that the British must actually withdraw; perfidious Albion must not merely state an intention to withdraw, as they did in the declaration which John Hume later obtained — with the rider of course that they would stay as long as the unionists wanted them to; which is till kingdom come. His rejection of the two state or federal “solution” went with his rejection of that (Belfast) ring-road socialism which was always acceptable to practitioners of conflict resolution.

Miriam became aware as early as 1972 of what she called a plague of locusts, of people — often on first name terms with British and American ministers and officials — who appeared variously as academics, social workers, journalists etc. They were all equally anxious to divert the Irish national liberation struggle away from anti-imperialist national and class analysis, and from political demands on an all Ireland basis, and to redirect it into the management of what was described, to Miriam’s fury, as an ethnic struggle in the six counties between Irish Catholic nationalists and British Protestant unionists.

Unlike Seamus Costello’s projected constitutional conference, conflict resolution meetings must necessarily be chaired by representatives of the imperialists in the guise of honest brokers. But they cannot allow any consideration of history or of colonialism. They insist on formal neutrality (though of course there cannot be real neutrality) not only from the chair but from the participants, and they do not allow discussion of anything in terms of moral categories such as justice or oppression. Republicans must put themselves on a par with loyalist rapists and sexual mutilators, and those who throw urine over eight-year-old girls trying to go to school.

The aim of conflict resolution is not justice but the ending of “disturbance of the peace” in the form of resistance to the status quo. Its method is cynical bargaining in relation to relative strengths and threats. Since it is accepted that the conflict is within the six counties, the alternative to submission by the nationalists would clearly be, on the part of the unionists who are stronger and more ruthless, a violence unlimited to the point of psychosis — a violence like that of the Israelis against the Palestinians, as the Israeli flags flying in loyalist areas make abundantly clear. Therefore the British must remain to placate the unionists and thus protect the nationalists.

Here today we remember Seamus’s and Miriam’s heroic attempt to prevent that outcome, and we face the tasks left to us by those who did not take their road.

← In Review: Kevin Bean and Mark Hayes (eds), Republican Voices
Women’s rights and the national struggle, 1916-1922 →
%d bloggers like this: