← The blinding of Emma Groves – front cover of ‘Socialist Woman’, March-April 1972
Statement on Sinn Fein and PSNI by families of republicans murdered by UVF, with police help, in Cappagh, March, 1991 → 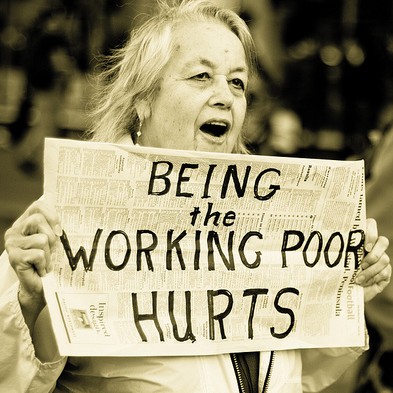 Over 750,000 people are currently living in poverty in the South; the total population in the South is about 4.8 million

The poem below was read by its writer, Valerie Bryce, at the open mic night at The Cottage Bar in Letterkenny, on January 28.

‘There but for the grace of God’, they say
‘Did you see on the news the aul woman in Dublin
Eating left over chips from a windowsill
And her living rough on the street and worse still
She’d dementia
God love her ‘tis awful, isn’t it?’.

‘It’s a national scandal’, they say
‘Having hundreds of patients waiting on trolleys
Sometimes for days
Pyjamas and drips all on public display
‘Tis inhumane’.

‘We’ve a right to the truth’ they’ll protest
When billions of public funds remain unaccounted for
And there’s no arrests
When facts about institutional abuse are withheld
To keep us in the dark and that tongues cannot tell
Of the manner in which Church and State are complicit
In protecting abusers
Making victims lives hell.

It’s a sure sign of madness, I say
To repeat the same thing again and again
Expecting a different result
Like the way we persistently choose those elected
Handing over our power though our needs are neglected.

It’s naïve to imagine the whole cart is rotten
There are well meaning politicians among them indeed
But the current system runs on the fact that you’ve somehow forgotten
The horse is being driven by the insatiable greed
Of bankers, developers and dishonest crooks
Who sport the veneer of the suited professions
Meanwhile dishing pay outs and fiddling the books.

It’s also naïve to suggest the electorate
Who choose to vote Fianna Fail or Fine Gael
Aren’t mostly just decent, hardworking people
Who despair that successive governments fail
To ensure that their lives aren’t only spent slaving
Away to get by till their coffin is nailed.

And while we all live in an economic system
Which forces individualisation
The poor are condemned
I see time and again it’s the forward thinkers
Who refuse the rhetoric of ‘us and them’.

It’s the artists, musicians, the poets and activists
Community workers, folks who’ve just had enough
Of what Adam Curtis coined ‘hyper-normalisation’
Of daily atrocities
Like the families sleeping rough
Or the fact that 222 people
Died on our streets in the past year alone
Or that unnamed man swept up in his tent by street cleaners
A piece of human garbage for not having a home.

‘There but for the grace of God’ they’ll say
Well…bollocks to that!
Was God short on grace on their final days?
Or is that just a platitude sown into your head
And repeated rather than take responsibility instead?

And how can you claim there’s no viable alternative
Or smile and say ‘better the devil you know’
When you’ve got no real concept of our mobilization
Or the inclusive visions that need roots to take hold.

‘Well aye we did see him that time on the tele
Accepting a bride to push planning permission
But he’s determined to deliver tarmac to our laneway
That’ll go over smoother than an act of contrition’.

Ah its madness indeed when you know; and they know
That you know you’ve been taken on a decades long ride
But if you insist on history repeating
I ask that you do so with your eyes open wide
To the fact that the stability you’ve craved and complied for
Can come tumbling down very easily when
Through illness, bereavement, unemployment or burnout
You’ll learn the real meaning of ‘us and them’.

← The blinding of Emma Groves – front cover of ‘Socialist Woman’, March-April 1972
Statement on Sinn Fein and PSNI by families of republicans murdered by UVF, with police help, in Cappagh, March, 1991 →
%d bloggers like this: