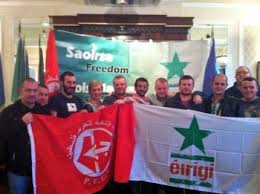 Today marks the dawning of not only a new year, but also a new decade.  The last ten years have been largely defined by the response of the Irish and British political establishments to the collapse of the private banking sector in 2008.

Both states chose to reward the malpractice and criminality of the private banks with unlimited political and financial support.  The cost of this support was transferred to the people at large in the form of vast public debts and the savage austerity programmes that were implemented on both sides of Britain’s border in Ireland.

Éirígí activists were heavily involved in the fight against the bank bailouts and austerity.  We take this opportunity to recognise and applaud the significant contribution that current and former party members made in these critical battles to defend the interests of the Irish people.

We also take this opportunity to thank all of thos

e who have supported the party over the last decade,  by attending party events, through financial donations and by entrusting our election candidates with their votes.

The decision of the Dublin government to bail out the private banks in 2008 exposed the underlying ideology that has informed all important decision-making by all Dublin governments since the foundation of the state.  When faced with choosing between protecting the interests of capital or protecting the interests of the Nation, they have always chosen the former, at great cost to the latter.

Decades of blind, unquestioning, fanatical commitment to the concepts of private property, private capital and private markets has done immeasurable damage to individual citizens and the Nation collectively.

As we enter 2020, more than one million Irish-born people are living overseas, with many of this number having departed in the last decade. Within Ireland, over a million more people are being denied their right to secure, affordable housing in a contrived housing crisis that is directly related to the bank bailout.

The public debt of the Twenty-Six County state, at over €200bn, is rated among the highest per capita in the world. And the Irish language – the single most important marker of nationhood – is in retreat within the traditional Gaeltacht areas and facing an uncertain future nationally.

These, and many other statistics, demonstrate that the Twenty-Six Counties bears a closer resemblance to a vassal state than a true Republic.

the Six Counties, partition and the same slavish commitment to capitalism has produced an equally dysfunctional state. As in the Twenty-Six Counties, healthcare, housing, education and other vital public services have been sacrificed over the last decade to protect the private banks and the profit margins of corporations.

More than twenty years after the Good Friday Agreement was signed sectarianism, poverty and inequality remain endemic. The fact that Stormont has been suspended for three years highlights the utter irrelevance and ineffectiveness of that assembly.

Prior to the 2016 EU referendum, Éirígí predicted that a Leave vote had the potential to trigger an unprecedented constitutional crisis within the British state.  That prediction has now been proven correct with momentum for Scottish and Irish freedom now steadily increasing.

d and ease of the recent abandonment of the DUP by The Tories once again confirmed that Belfast has never been as British as Finchley.

r as a political, economic and military force than at any point since before the Cromwellian conquest. By their actions, they have shown that they will not jeopardise Brexit for a gesture of solidarity with the lost cause of Irish unionism.

Éirígí believes that this still evolving political landscape provides a very real opportunity to advance the cause of Irish reunification and national freedom. As republicans and socialists we will not shirk our responsibility to identify and pursue the fastest possible route to a British withdrawal from Ireland and the establishment of a new all-Ireland Republic.

Over the coming twelve months and beyond, Éirígí is committed to working with other progressives to build the maximum possible level of popular support for Irish reunification on both sides of the border. The building of such support is an absolute prerequisite for the constitutional change we seek.

Since 2016, housing has been Éirígí’s priority campaigning issue. Over the last four years we have continuously stood with the victims of current government housing policy, while calling for the creation of a new system of universally accessible, mixed-income public housing. Through 2020 we will continue to build support for ‘UP Housing’ through the organisation of public meetings, protests, direct actions and other campaign work.

The coming year will also see Éirígí further develop our campaign for the nationalisation of all renewable sources of energy through our recently launched ‘Power To The People’ campaign. The necessary transition to a low-carbon economy cannot be entrusted to the whims of private corporations who are motivated by short-term threats to their profits and not long-term threats to the global climate. 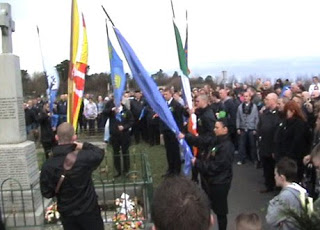 The failure to deliver either an Irish Language Act in the Six Counties or the substance of the 20-Year Strategy for the Irish Language in the Twenty-Six Counties again reaffirms the critical importance of grassroots language activism. Éirígí activists will continue to work within the Irish language movement in 2020, as they have done for many years. We commend all those who work towards the restoration of the language, despite the hostility and indifference of the political establishment and both states.

These individual campaigns form part of Éirígí’s overall vision for a new all-Ireland Republic that will serve as a beacon of hope for oppressed peoples across the world. The struggle for freedom and justice in Ireland cannot be separated from the struggle for freedom and justice globally. We stand in solidarity with those who stand against the tyranny of imperialism and exploitation in Bolivia, Palestine, Kurdistan and in other countries all across the Earth.

At the dawn of a new decade of struggle, our activists stand ready to play their part in the fight for that New Republic, based on the timeless principles of equality, liberty, community, democracy and justice; a New Republic that will deliver sustainable housing, healthcare, education, employment, safety, justice and equality for all. A New Republic that end the reign of the banker, the landlord, the boss and the gombeen politicians that they have bought.