The 1932 Belfast Outdoor Relief riots and lessons for today 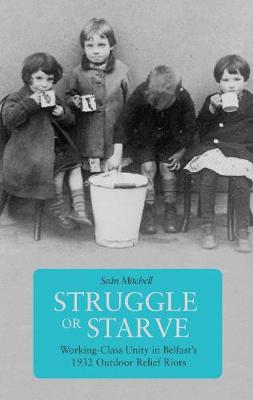 Does intense class conflict with bosses, cops and government necessarily lead workers to draw radical conclusions? To put the question another way, does struggle mean that the working class becomes conscious of what is in its own best interests?

In 1922 striking miners defending their jobs in the South African town of Witwatersand fought gun battles in the streets killing about 70 troops. The political conclusion those white workers drew from their experiences was that they needed a Nationalist-Labour Pact with the Afrikaaner Nationalist Party. This was despite the involvement of the newly founded Communist Party of South Africa in the struggle. Even intense and bloody class conflict is no guarantee that the working class will necessarily act in its own best interests.

That’s a lesson it’s worth holding in mind when reflecting on politics in the north of Ireland.

Seán Mitchell, a member of the Socialist Workers Party and People Before Profit in Belfast, has written an important new book on a largely forgotten period in the city’s working class history, the 1932 Outdoor Relief Movement. It’s the story of how a small group of Belfast communists, with a former IRA man as their public figurehead, led a mass movement of unemployed Protestant and Catholic workers against the proto-fascist Stormont government for the right to have enough money to survive on.

The two states that were created in Ireland after it was partitioned by British imperialism in 1921 both had low wage economies, high levels of unemployment and deep poverty. Even in the 1940s it was not uncommon for children in Belfast to have no shoes. In the north the form of welfare that was available would have been familiar to Engels from Manchester in the 1840s. Outdoor relief was provided by a Board of Guardians, men with a Calvinist outlook towards the undeserving poor. The depression caused by the Wall Street Crash pushed unemployment in the north to around 40 percent and thousands had no access to any form of benefits. By 1932, 11 percent of Belfast children were dying before their first birthday. The crisis was so severe that even the relatively privileged Protestant population was experiencing real hardship, administered by a government which existed to guarantee their superior status.

The Belfast left essentially consisted of the Northern Ireland Labour Party (NILP), an organisation which got around 8 percent of the vote in the 1930s and the Revolutionary Workers Groups, a precursor to the Communist Party. Mitchell notes that it tried to apply whatever line the Stalinist bureaucracy in Moscow was advocating, which at this point was that NILP and other social democratic parties were “social-fascist”. Nevertheless, it was part of that revolutionary process that began with the Russian revolution and Struggle Or Starve is a superb account of how, when circumstances are right, even tiny revolutionary groups can find themselves providing strategic leadership to a mass movement, one which in this case had an insurrectionary potential.

With Tommy Geehan, an IRA man who’d joined the RWG as their main orator in a time of large outdoor meetings, the small group of Belfast Marxists organised demonstrations, occupations and established themselves briefly as the hegemonic force in the city’s working class. To the extent that they events described are still remembered, it’s because it was the high water mark of Protestant and Catholics engaging together in class struggle, including in joint riots against the police which had been ordered to clear the movement off the streets.

For a section of the Irish left the events Mitchell describes are more than history. They are the template of what the class struggle in the north of Ireland should be like the whole year round – a united six county working class putting sectarian divisions behind it and supporting a socialist party which recaptures that spirit. That’s the sentiment which permeates the book’s conclusion. However, the northern state will be a century old in a few years. Nothing like that level of common struggle has been achieved since. The current set up is a sectarian division of money and patronage and it’s likely to stay that way. As if to prove the point, in 1935 loyalist pogroms drove thousands of Catholic out of their homes.

Seán Mitchell’s book is a valuable contribution to the history of the Irish working class. It’s also well worth reading for activists who want a detailed investigation of how socialist organisations can provide real leadership in moments of extreme crisis, and for readers with a particular interest in the north of Ireland it poses profound questions on the relationships between socialism, loyalism and British imperialism.

The above review is taken from the Socialist Democracy site, here.