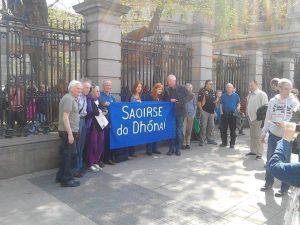 “Freedom for Donal” protest outside Leinster House, Thursday, May 12

Last Thursday (May 12) saw a protest outside Leinster House against what is, in effect, the internment of republican activist Dónal Ó Coisdealbha.

This case is particularly appalling since he will be tried by a non-jury court (the Special Criminal Court) where the three judges can accept secret evidence.

Although three TDs (Clare Daly, Maureen O’Sullivan and Mick Wallace) have offered to put up bail and Dónal has agreed to house arrest and electronic tagging, he has been denied bail.

It’s in the interests of everyone concerned with basic civil liberties to oppose what amounts to the internment of this young activist.