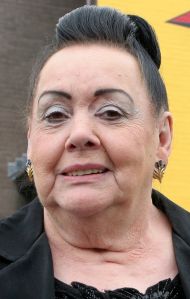 The following appeared on July 19 on the IRSP site, here.

Saturday 18th July 2015 saw Derry City centre come to a standstill as Republican Socialists from across Ireland assembled to say farewell to Peggy O’Hara, a lifelong supporter and activist in the Irish Freedom struggle and mother to three imprisoned Republican Volunteers, including H-Block martyr Patsy O’Hara, who died following 61 Days on Hunger Strike in May 1981 aged 23.

Peggy’s was a life immersed in the cause for Irish Freedom. A dedicated supporter of the armed campaign against British Imperialism, she balanced the priorities of running a family with those which inevitably come with a National Liberation struggle. In this task she was faced many times with agonising realities and trials, all of which she faced with courage and dignity. 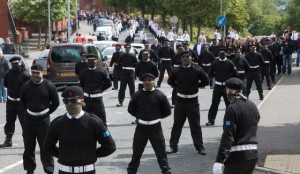 Earlier in the week a firing party paid tribute to Comrade O’Hara by delivering a volley of three shots over her coffin, on which was placed the Starry Plough and Irish National Flags. The Volunteers then offered further salute in the fashion of military genuflexion, the same salute paid at her son’s graveside in 1981.

Peggy’s death had brought people together from the wider revolutionary republican family with comrades from across the country making their way to Longtower Church in Derry where requiem mass was said before the funeral cortege made its way to Derry City Cemetery. 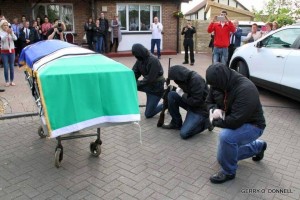 Marching ranks of Volunteers as well as IRSP activists in black and whites accompanied Peggy on the long journey to her final resting place, stopping only to pay a short tribute at the Bishop Street INLA monument to her son.

At Derry City Cemetery the proceedings were opened and chaired by Derry IRSP spokesperson Martin McGonigle who urged those in attendance not to be sad as this is not what our Comrade would have wished for. Speaking of her traditional working class values he stated, “Peggy never lost her good spirits despite all the hardship. Even in her private life, she epitomised the socialist ideal. She had no regard for material wealth but was devoted to her family and friends”.

A lament Táimse im Chodladh was played on the uilleann pipes before Tommy McCourt – a founder member of the modern Irish Republican Socialist Movement – stepped up to give a most moving oration, recounting in detail the trials and tribulations experienced by Peggy during the dark days of 81.

Such was their deep-seated hatred for the Hunger Strikers the British government threatened to drop the body of Patsy O’Hara from a helicopter onto the family’s doorstep, we were reminded.

And Peggy, we were told, was torn between the love for her dear son Patsy’s young life and her own steadfast commitment to his very own ideals; this led to an agonising experience when the Thatcher administration (along with constitutional nationalism) began to put pressure on the mothers of the Hunger Strikers, urging them to initiate measures to commence feeding should their loved ones lose consciousness. Having stood by her son’s wishes the agony of that dilemma stayed with Peggy for the rest of her days, yet served only to reinforce her commitment to the freedom struggle and the INLA’s role in that fight. She spent the rest of her life travelling and telling the stories of 1981 and assisting with commemorations and initiatives aimed at supporting the POWs, past and present.

A young relative of Peggy’s offered a song which was well received, stirring emotions with the telling line “show me an English man who would starve himself to death”, before family members and comrades released three white doves into the Derry air to a shout of “Let the fight go on”.

The proceedings were then brought to a close with the playing of Amhrán na bhFiann by young comrades from the James Connolly Republican Socialist Flute Band.

The Irish Republican Socialist Party wishes to thank all those who came out to pay tribute to Peggy on Saturday last; criticisms of her funeral arrangements should be treated with the contempt they deserve. In many ways her passing represents an end of an era, obviously for the O’Hara family but also for the Republican Socialist Movement and the wider Republican family in general. We take this opportunity to thank Peggy O’Hara for all her efforts on behalf of our country and our class, and we commit ourselves to continuing the struggle for which she gave so much.