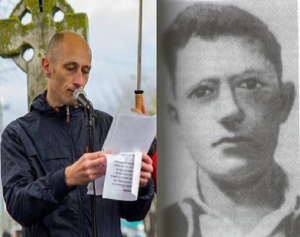 The 3rd Annual Frank Conroy Commemoration was a huge success with a large crowd, including councillors Joanne Pender and Mark Lynch, attending the event at the Republican memorial in Kildare town, on Sunday 9 November.

He was born on 25 February 1914, in Kilcullen, Co. Kildare.  His parents were Michael Conroy (born in Co. Laois) and Catherine Farrell (born in Co. Dublin).  They were married in Dublin South in 1908.  Michael Conroy was a baker by trade and moved his family to Co. Kildare, probably for employment reasons, as there was a large bakery, O’Connell’s, operating in Kilcullen.

Durney said, “Frank Conroy, a former IRA volunteer and a member of the Communist Party, left for Spain on the Dun Laoghaire-Holyhead ferry on 13 December 1936 with about twenty-five other Irish volunteers of the International Brigade, including Republican Frank Ryan.  Within days six of them would be dead including Conroy.”

Spanish civil war historian Harry Owens was the main speaker at the commemoration.  He noted “that socialist Fr O’Flanagan (a relation of Ming Flanagan, MEP) who read the prayer that opened that first independent Irish Parliament, also stood here in Kildare in 1935, one year before the Spanish civil war, when he inaugurated this monument to seven workers shot in the Irish civil war for being caught with weapons.

Why did these Irish Republicans and leftists such as Frank Conroy go to fight in Spain?  Frank Ryan was asked this by the Gestapo when later captured in March 1937. “Because it’s the same fight in both places,” Ryan had replied.

At Lopera in Cordoba, the fledgling units of Irish in the new international brigades went into action in the French International Battalion which was sent south on Christmas Eve 1936.  On 28th December, they advanced uphill to a town where they were bombed by enemy planes and heavily machine-gunned by the fascists.  Even experienced commissars like Ralph Fox and poet John Cornford were killed, as were Frank Conroy (Kildare), Johnny Meehan (Galway), Henry Boner, Jim Foley, Tony Fox, Leo Green, Michael Nolan, Michael May, Tommy Woods (Dublin).
Frank Conroy’s body, and those of his dead comrades, lie somewhere in the hills around Lopera today.

Speaking after the event Stewart Reddin wished to thank everyone for attending, adding his thanks to performers Paul McCormack and Cormac Ryan for the great music.