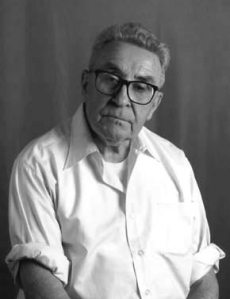 George was an immensely humble and decent man, belying all the media images of an IRA gun runner. Immediately at ease as we had cake and coffee served to us, the 89 year-old gave us recollections of a long life well lived in a room full of manifestations of those memories. Pictures of hunger strikers, of Bernadette McAliskey and her children hung on the wall, posters and papers from the movement were on the tables. His nurse and friend Prissy was there, along with her daughter, and it is Prissy’s voice you will hear at the very end of the interviews describing the beautiful relationship the two of them had and his impact on her.

In this lengthy interview George talks about his early memories of the Republican movement in Ireland, his friends and comrades in the IRA who went to fight in the Spanish Civil War with the Connolly Column, racism in Irish-America, Mike Quill and the Transport Workers Union, the Cuban Revolution, the peace process and much, much more.

It was an honor to get to know George a little in the last period of his life and talk with him at length. I disagreed with George on all kinds of things, but had deep respect for him. He was a worker, a union member, and saw the world from that point of view. He was true to his calling all of his many years and stuck doggedly and unashamedly to the side of the oppressed and the working class.

I respected most his willingness to buck much of Irish America and support gays and lesbians, the Black Panthers, the Young Lords and Fidel Castro. He was a person of principle, and yet without the slightest hint of self-righteousness. A partisan of the left who had a long friendship with the Irish and US Communist Parties, George was also an unrepetent Irish republican, and Patron of Republican Sinn Fein. A republican and an internationalist who lived through some of the crucibles of the 20th century.

Unedited, the interview is missing the first few moments and hasn’t been public before, largely because I am horrified by the sound of my own voice. So here then, for posterity, is one of the last interviews of the old man who had seen, and quietly done, so much.

The interview is almost 2.5 hours long, divided into three parts.  Do go and listen to it at: http://rustbeltradical.wordpress.com/2014/10/17/interview-with-legendary-irish-republican-george-harrison/