Anyway, check out the group’s excellent 1968 performance on Swing-In, especially ‘When I was a Young Girl’ which starts at about 11 minutes into the film.  Jools was born in 1947 so she would only have been 20 or 21, makes her vocal performance even more impressive, although she mucks up one line of the lyric.  Anyway this stunner is at: http://www.youtube.com/watch?v=lbgLwOMv7uM

Also, the short film she starred in, I think it was a BBC or ITV television play, Season of the Witch, is now on youtube.  It’s an interesting little snapshot of 1969 in Britain.  In it, Jools’ character gets sick of her office job and takes off on a trip, hanging out with student radicals, attending Blind Faith’s Hyde Park concert, going to the seaside, having sex with Paul Nicholas and more.  See: http://www.youtube.com/watch?v=DkwPlRC_Tow

Also, just while writing this, came across Jools, Brian, Lobs and Toli, in what I assume is either 1967 or 1968 – it’s when Jools had her Cleo Laine Afro: http://www.youtube.com/watch?v=7G4tAam4Arc 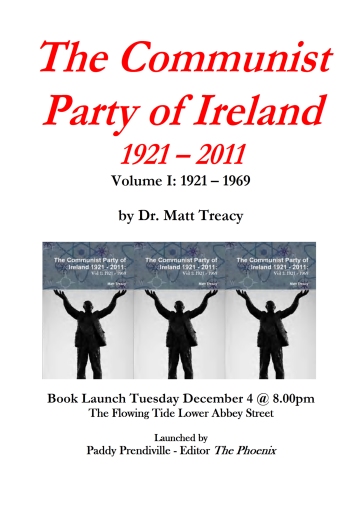 Book wise, I’m currently reading the first volume of Matt Treacy’s History of the Communist Party of Ireland, covering 1921-1969.  I must say it reconfirms my view that the CP has a lot to answer for and would be best dissolving and handing over its assets to the socialist-republican groups.  He certainly demolishes some CP-created myths in relation to the 1930s.

However, the book needs some serious proof-reading, as it’s riddled with typos; it also needs proper referencing and an index.  If people are going to bring out books, they actually need to observe certain standards of production.  Having said that, I’m finding the content fascinating and well worth the effort.

But please Matt, get your publisher to get the second volume properly proofed and get the footnotes and index sorted. . .

My latest book purchase is Theodore Koditschek, Sundiata Keita Cha-Jua and Helen A. Neville’s Race Struggles, which I’ve yet to start.  I’m also going back over Rubin’s Essays In Marx’s Theory of Value and his History of Economic Thought and bits and pieces of Capital, as I update an old all-afternoon seminar on “Capital and Capitalism”, to try to make it more interactive.

I’ve also got to read up on World War I in order to put together an all-morning course at the local Workers Educational Association on the origins, course and outcome of this massive imperialist conflagration.