Tonight’s Irish Night is the second part of a talk on “Constance Markievicz: countess and revolutionary”.  It marks the end of this term’s advertised Irish Nights.

Next term, Irish Night at the WEA will be continuing on a fortnightly basis, starting on Thursday, October 17.  Each session will run from 7.30-9pm, with an initial focus on women and the struggle for Irish freedom.

October 31: Off Our Knees screening; this is a documentary about the civil rights movement in the north of Ireland in the 1960s and events there up to 1988, written and presented by Bernadette (Devlin) McAliskey. 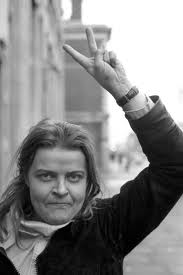 November 14: Mna na IRA: Rose Dugdale: this is an episode of a series of Irish TV documentaries on women who were involved in the armed conflict against the British military presence in Ireland; this episode is on Rose Dugdale, an iconic revolutionary figure whose background was in the English upper class.

Each showing will be accompanied by a short introductory talk.

November 28: The Troops Out Movement in Britain: a talk on the campaign in Britain for the withdrawal of British troops from Ireland

a gold coin donation is appreciated to help cover costs