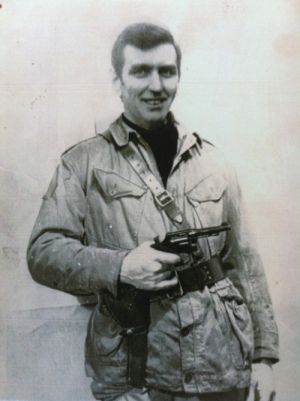 The same day as the 1997 commemoration for Máirín Keegan (see here), a commemoration took place for Liam Walsh, also of Saor Eire, who died in a premature explosion while on active service in October 1970.  Máirín, who was taking part in the action, was uninjured – she died of cancer several years later – while another participant in the action, Martin Casey, was injured.

Liam had originally been in the IRA in the 1950s, including having been commander of the South Dublin unit in the late 1950s.  He was one of a layer of Dublin Volunteers who was attracted to revolutionary socialism in the early 1960s and joined with a small layer of Trotskyists such as Máirín to found and develop Saor Eire, an armed Marxist/republican group.

Liam’s funeral was attended by 3,000 people.  There’s a bio of him, with some great photos, here.

Below is a link to a short video of the 1997 commemoration.

Unfortunately, there’s not much in the way of an oration about him.

The 1997 commemoration involved just a handful of people, an indication of how Saor Eire had been forgotten in the period between when they dissolved in the mid-1970s and 1997.  It’s good to give this courageous group of socialist-republicans their due.

It has also been vindicated by the way that the currents that have come out of the Provos since the end of the 1990s have all adopted formal positions for socialism.